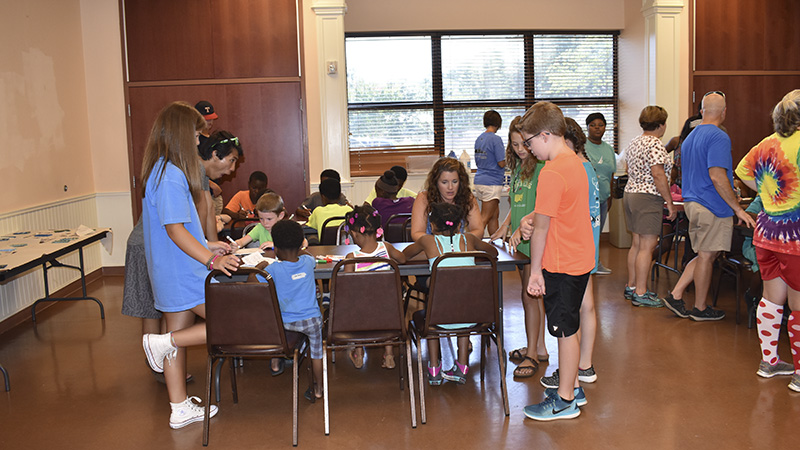 First Baptist Church on the Square is hosting a Backyard Bible Club for grade school children this week. --Gabrielle Jansen

First Baptist Church on the Square is holding a Backyard Bible Club for grade school children at the Benjamin Harvey Hill Homes on Monday through Thursday.

Missions and Collegiate Minister Tracey Deavers said the church partners with other Baptist churches to bring a Vacation Bible School to the community.

“The whole week is a mission together, most of our churches are coming together this week to try to do something very intentional in the community,” Deavers said. “We just had [Vacation Bible School] last week, and so we’re bringing our VBS here this week too and doing it for these guys.”

Deavers said Chad Cooper, West Georgia Star’s Director of Operations, let them continue a summer program with the children of the area.

Deavers said the church brings the camp to the housing development because they want to connect with the children.

“It’s a great opportunity to get to know the kids and start building relationships with them,” he said.

One of the activities the campers did was paint light switch covers to look like outer space to talk about God’s creation of space, volunteer Raye Cousins said.

Volunteer Claire Batchelor said they teach the children the Gospel.

“It’s just the Gospel from beginning to end. How man sinned, God had a plan to restore the relationship with man, and that was Christ dying on the cross,” Batchelor said. “And we want to get that story out to whoever will listen.”

Cousins said the difference between the Bible club and vacation Bible school is that the program reaches out to the children of public housing.

“Rather than them come to us, we come to them,” Cousins said.

Batchelor said the lessons from the camp is meant for everyone regardless of being a member of the church.

“The story is for everybody,” Batchelor said. “The story at the church is that same story that we’re telling here.”

“We have churches that are doing things all around the community this week,” he said