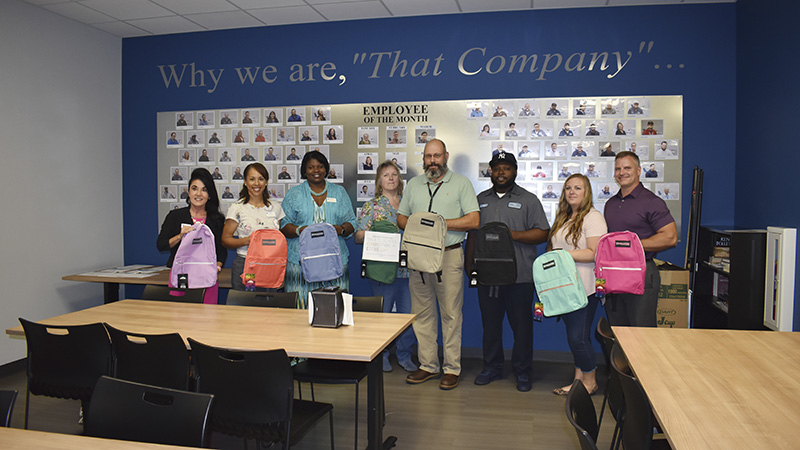 Fokker Aerotron Director of Quality Kirt Mathes said the company wanted to give to the community after recent fundraising efforts, including sponsoring the Salvation Army’s annual Christmas drive.

“We wanted to give a school supplies backpack, but after contacting Ethel Kight, they had supplies, so we just went with the backpacks,” Mathes said.

“Fokker Aerotron is trying to get involved in the community and help out where we can.”

Mathes said the company has held several recent fundraisers and is now shifting its focus to giving back to the community it serves. He said part of the company’s connection to the school is that one of his coworkers is married to one of Kight’s teachers, Leslie Knighton.

“She got me in touch with [Principal Candace] McGhee,” he said.

McGhee said the company feels like family to the school.

“It’s certainly great for us with them being so close to the school, I feel like we’re just a school community and it’s going to take everybody to build just the culture of our school, and we’re so happy they’re involved,” McGhee said.

McGhee said the donations help take care of the school’s need for supplies.

“[We do] anything that we can do to help our kids be successful, and we think this is a great way to do that,” she said.

“I was thinking along the lines of if we could get emergency kits for the teachers to have in their classrooms, just with band aids and just the little basic items that they would need,” she said. “Perhaps some belts for our little boys who don’t have belts.”

McGhee said the school is thankful for Fokker’s donation and would want to help out with their future fundraisers.

“Fokker is doing great things in the community,” she said. “We’re just grateful to be on the other end of the receiving end as well.”