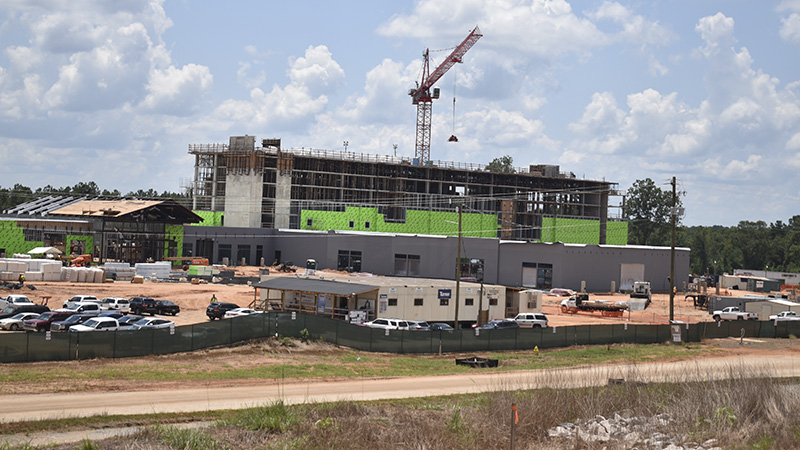 A roof was installed on the hotel portion of the Great Wolf Lodge on Wednesday. --Alicia Hill

Great Wolf Lodge hit an important milestone on Wednesday when a roof was installed on the hotel portion of the project.

Turner Construction Company held a topping off party on Wednesday to celebrate pouring the cement for the roof of the hotel. The celebration was attended by city officials, contractors, a representative from Great Wolf Lodge and approximately 280 workers on the project.

“One of the most important milestones is topping off the hotel,” Great Wolf Senior Project Executive Matt Morris said of the celebration.

The completion of this milestone will make it possible for the project to continue to move forward on schedule and will increase the amount of work that can be done even on rainy days.

“It is the highest portion of the building — it is actually the roof of the top portion of the hotel,” General Superintendent Bobby Langdale said. “Then it is just getting the hotel closed in — dried in, conditioned air and proceeding with the finishes.”

Other milestones like enclosing the building, are used to gauge the project’s progress and determine the resort’s final completion date. Officials confirmed Wednesday that Great Wolf’s LaGrange location is still on schedule to open in spring of 2018.

Officials with the City of LaGrange expressed excitement over the resort’s progress especially in light of the above average rainfall this year.

Here’s a look at the entire construction area. –Alicia Hill

“From a Development Authority perspective, it is just amazing the progress that has been made,” President of the LaGrange Development Authority Scott Malone said. “One of the things that we were commenting on was how fantastic Turner Construction is with this turnout here today, and how they treat their employees. (This) is a big deal. Schedule wise, they are right on schedule. They told us about four months ago that July 19 would be the topping out party, and it is July 19 (now), and this is the topping out party, which is pretty amazing once you consider all of the rain that we’ve had this year.”

Officials were likewise impressed by the scale of the project which is already partially visible from the interstate.

“I think it is just remarkable, the rate of speed that they are bringing this together,” Community Development Director for the City of LaGrange Alton West said. “Just to see the massiveness of it and the view from the interstate is going to be awesome once it is all said and done.”

“It is amazing,” Malone said. “People can see the scale of the project now. It is enormous when you walk by and see it up close. I think people in the community will be very excited about this project.” 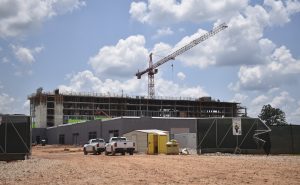 Construction continues on the hotel of Great Wolf Lodge.

One of the driving factors for the city’s commitment to the project has been the expectation that the resort will fill several boxes on citizen’s wish lists.

“We have a lot of people asking for a Dave and Busters and things like that, and this is that on steroids,” Malone said. “The family entertainment center, the conference center, they are all open to the public, and so they are going to have four or five restaurants in the project. You’ll have putt putt miniature golf, a ropes course, an arcade. All of these things are things that our community has needed for a long period of time, and this one project is getting it together at the right time, I think, for the growth of our community.”

Malone clarified that while the water park will only be open to hotel guests to avoid long waits for the slides, many other areas will be open to the public.

“There is a misperception with the local community that it (Great Wolf Resort) is not for them, and the reason that the water park is only open to hotel guests is to protect the experience for the hotel guests,” Malone said. “They don’t want to have long lines of folks waiting to go through the water park, and so with a 456-room hotel and 1,000 plus guests a night — that is why they limit that to hotel guests. The rest of it is going to be open to the public.”

The city owned conference center at the resort is expected to be a major amenity to residents. The dry play areas will be open to the public and are a major focus of the resort’s LaGrange location, but even residents who never step foot on the property will benefit through tax revenue and business brought in by visitors.

Residents are also expected to benefit from the resort because of the jobs that the resort will bring into the community both during construction and after it opens. Officials over the project confirmed that they are still doing their best to employ local workers whenever possible, though due to the specific skill sets needed it is common for the contractors to hire from within the region.

“We have made a concerted effort to try to find people locally, and we have several people working locally who are from the LaGrange area,” said Project Manager Louie Larry of FitzGerald and Sons Plumbing Co., one of the subcontractors on the project. “The project, I believe, is going to be good for the local economy.”

Many of the contractors like Larry have ties to the region, and have expressed genuine interest in the outcome of the project.

“I live in Greenville, and my wife works for the Troup County Board of Education in maintenance,” Larry said. “She has worked in the county for 14 years I believe, so we see what it does for this county. It is giving people a lot of jobs now, and when it is completed, it will give people permanent positions in the county.”

To learn more about Great Wolf or see a virtual tour of what the completed hotel should look like visit www.greatwolf.com/georgia