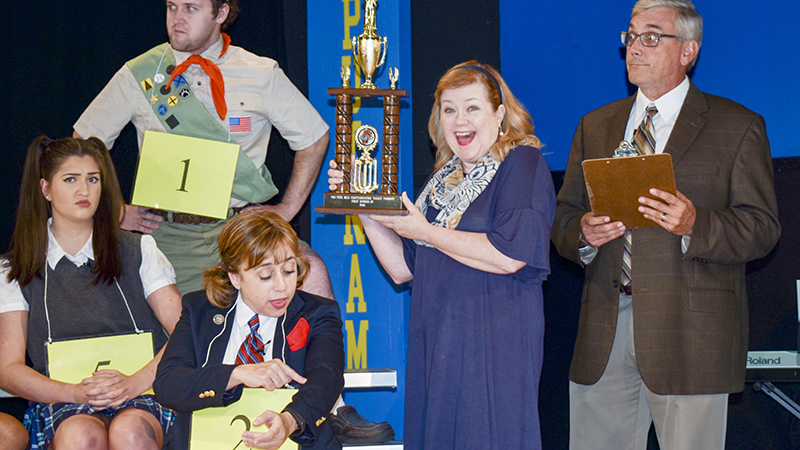 The Lafayette Society for Performing Arts’ theater company opened its fall season with laughter and an award winning musical score on Thursday.

“It isn’t often that you get to see some of your favorite adults play elementary school children, and it has an absolutely amazing score with very catchy music,” LSPA Marketing Director Amy McDow said. “There are so many surprises because the audience is involved, so every single night is a different show. It is just one of my favorite productions, and they do a fantastic job with it.”

The musical is a favorite for several of those involved in its production, and the theater company hopes to bring the some of the same sense of enjoyment to LaGrange residents as the Tony award winning show received during its time on Broadway.

“It got lots of recognition when it was on Broadway, but also it is a really funny show,” Director Valerie Longshore-Sargent said. “It has some audience participation, and it seemed to fit very well for the kind of theatre that we do at the LSPA.”

The adults who play the spelling bee participants will serve to highlight some of the oddities of life as a child.

“Upon first glance, you’d think it is a kid show, and it is a kid show to some extent, but it is also not,” Actor Malcolm Stephen said. “One thing I really like is that, yeah, the main characters are kids being played by adults, so kids think that they are entitled to stuff.”

That entitlement shows up in some unexpected ways during the show as the children come to realize that not everyone can win.

“One of the main themes that I really like — and we all sing about throughout — is that life is tragic and unfair, but it is,” Stephen said. “Life isn’t always tragic. Life isn’t always unfair, but it also is. I feel like that is something that really resonates in me, and helps me play my characters better. These kids all come from different backgrounds, and they are coming to win the spelling bee, and they all think that they are going to win for different reasons, but some things in life don’t pan out quite how you think they will, and I feel like that is a hidden theme in this show that a lot of people have to dig deeper to get.”

The audience can also expect to see the characters grow as the play progresses.

“I will play Olive Ostrovsky,” Actress Katie Holbrook said. “Throughout the spelling bee she kind of develops this maturity and independence that she can still be a great speller even without her parents around.”

Despite the cartoonish nature of the posters, the play is recommended primarily for adults.

“It sounds like it’s an elementary school production, but it’s not, and I think that is one of the things that makes it a really good date night for adults,” McDow said.