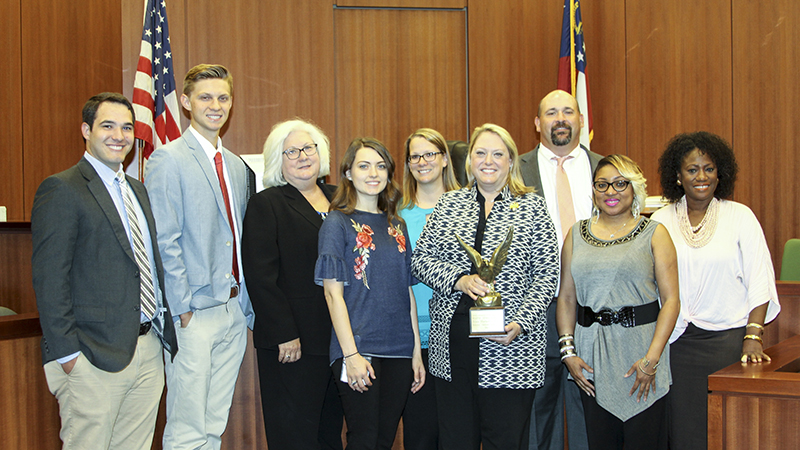 The award is a major honor that is only bestowed on one solicitor-general in the state each year. Baker was honored to receive the award, according to her the recognition is the result of her team’s hard work more than anything that she has done personally.

“This is not an individual award,” Baker said. “This is an award that reflects the entire office’s work.”

Baker, and by extension her team, were chosen for the award because of the work that they have done to improve the court system in the county and the state.

“She was selected based on her innovation with the courts here,” Sandra Taylor said. “We had some of the first accountability courts in Georgia, starting with the DUI courts which was aimed at addressing the issues of substance abuse primarily in our court.”

Troup County has been a lead adapter for accountability courts for years, and innovations to how local courts function has been a focus for Baker’s office.

“If we want to do something differently than the way that courts have always worked in the past, it takes everybody being on board, and we’re lucky that that is the case,” Baker said. “Anybody can have an idea in this office that might help things go in a better direction, and we’ll try it,” Baker said. “We are lucky that we are able to do that.”

She has strived to balance older methods with that innovation in order to decrease the frequency of reoffenders.

“There are times where we do have to use the old court model to keep people safe and put somebody in jail, but there are so many times that we can do something different,” Baker said. “By doing something different, whether it is a pretrial diversion or some other different ideas in terms of sentencing we are able to make sure that that person never comes back into the criminal justice system, and that is the idea: How do you make somebody change a behavior, so that they never come back into the court system.”

Pretrial diversions generally send first time offenders to some sort of rehabilitation or personal development program that is designed to help them address the root cause of the offence.

VFW Yard Sale has a lot to offer, tables…