Brewery in West Point to open in September 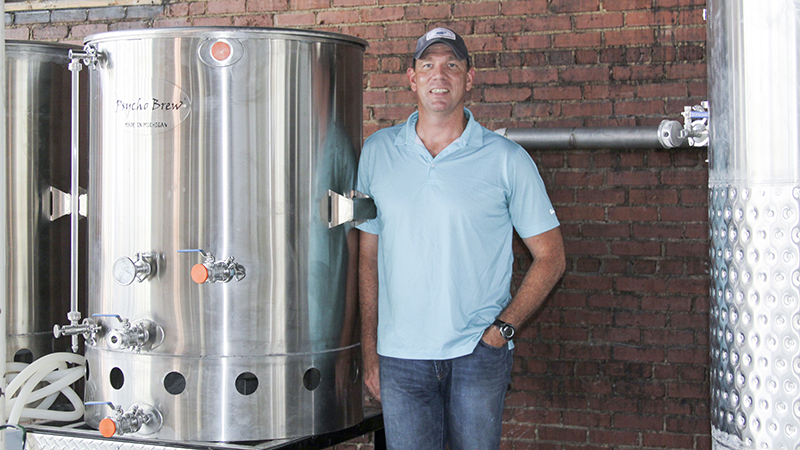 Co-owner Michael Denehy poses for a photo in the the Chattabrewchee Southern Brewhouse earlier this week. The brewery is expected to open by September. --Alicia Hill

WEST POINT — An all-American undertaking is underway in West Point, as the owners of Chattabrewchee Southern Brewhouse prepare to open their doors this fall.

The West Point brewery is owned by a military couple who decided to follow their dreams and open a local business just down the road from where brewery co-owner Kathy Denehy grew up.

They are getting the brewery started with the help of local firefighter and brew master Barry Stephens who will brew the craft beer in Michigan made steel brewing equipment.

Even the preparation for opening day has been fun for the group.

The branding for the company centers around uniquely regional features from the opossum on the label to beer names like ale 706. Kathy Denehy, a Springwood graduate, stated that she is excited to be opening a business where she grew up, but this brewery will hold national significance as well.

Michael Denehy is a retired lieutenant colonel who served in the army special ops division during seven combat tours in multiple countries. He retired from the military this spring and has been working hard to prepare the brewery for its prospective opening date this fall.

“For the last several years that we were planning this, we were both active duty military, and so it was both of us after hours and in our free time trying to schedule meetings and get things done,” Kathy Denehy said. “It is definitely a challenge trying to balance both of them.”

While craft breweries are becoming increasingly popular in general, Chattabrewchee is targeting a more specific audience with the brewery.

“Because it is a brewery owned by a woman, we cater toward women, so a lot of the little touches (focus on women),” Michael Denehy said.

The brewery will also make a point of making sampling beers easier for women and new beer drinkers, by installing a pay per ounce self-serve system, which will allow visitors at the brewery to sample craft beers by the ounce instead of committing to large glasses. The system will use passes that will allow customers to pay only for the beer that they actually get from the taps.

“The reason why we think this appeals to women and new craft beer drinkers is that you don’t have to make a 16 or a 22-ounce commitment to a beer in order to try it,” Michael Denehy said. “You can come up and we’ll have 12 taps, and you can try one or two ounces of every single one of them, and kind of figure out what you want. We think that is a much more female friendly and a much more newbie to craft beer friendly serving system.”

That pouring system in addition to handmade furniture, a mural based on local history that the owners hope to work with local artists to create and beer scented candles available for purchase will help the owners work toward their goal of a pleasant atmosphere for the community and visitors to enjoy craft beer.

“We just wanted to make sure it was somewhere where everyone is comfortable drinking beer,” Kathy Denehy said.

With owners who have fought to keep America safe and a veteran firefighter for a brew master, it should come as no surprise to visitors that all the brewing equipment is American made.

“Given the fact that I’m a 21-year army veteran with seven combat tours, and my wife has been in for 11 years and is also a combat veteran, we refuse to buy anything that isn’t American made,” Michael Denehy said. “We are very proud of that.”

West Point’s Chamber of Commerce is also excited about the new addition to downtown, and its potential to give locals something new to enjoy in town.

“I think any new activity or attraction to downtown West Point is always great for our community,” said Meghan Duke, Vice Chair for the West Point Business Council. “It diversifies us, and gives us something new to do. It is always fun, and people are always looking for something fun and new to do — a new experience.”

The owner’s biggest hope though is that the brewery will be able to form strong relationships with other local store owners to create a stronger, more connected community.

“We are really hoping for a lot of community involvement,” Kathy Denehy said. “We are really looking forward to having people there and having regulars, hosting events and supporting other businesses.”

Gov. Nathan Deal signed Senate Bill 85 into law in May, which will allow breweries like Chattabrewchee Southern Brewhouse in West Point and Wild Leap Brew Co. in LaGrange to directly sell up to 3,000 barrels of beer to customers annually. Georgia was one of the last states in the U.S. to legalize direct sales of beer.

Chattabrewchee currently plans to open on Sept. 1 when the brewery will be able to sell beer directly to restaurants and customers.

To learn more about Chattabrewchee, visit them on their Facebook page.