LAGRANGE – When Troup head coach Tanner Glisson decided to offer a youth football camp, he figured somewhere in the ballpark of 40 young people would show up.

There were a lot more than that.

There were 82 boys and girls participating in the Troup High Youth Football Camp that was held on Friday morning at the school’s practice field.

The campers were not only treated to some on-field instruction from the Troup coaches and players, but they also received breakfast and lunch, as well as a T-shirt.

Glisson’s goal was to offer the camp for free, and he was able to do that.

“For us to do it the first year, and have over 80, and to have the resources to be able to get them fed, get them shirts, that was good,” said Glisson, Troup’s third-year head coach. “Hopefully next year we can improve it and do better.”

Glisson enlisted most of his coaches, as well as many of his players, to help out with the camp.

One of those players, Tyler Kitchens, said he and his teammates had a blast.

“It was very fun to be out there with the little ones,” Kitchens said. “Just seeing them smile, and having a good time, and having fun together was fun.”

The campers were dropped off at 8 a.m., and after breakfast, they headed out to the field for some instruction time.

They worked on all the basic skills, and they got test out what they learned during a flag-football game, which Troup player Mickey Jarrell said was one of the highlights of the day.

“It was real fun,” Jarrell said. “Probably seeing them go up against each other in flag football. That was the best.”

“It was fun, just watching them compete against each other, going at it,” Battle said.

When the on-field time was done, the campers headed back to the cafeteria for lunch, and after receiving their T-shirts, it was time to go home.

“It’s an outreach for us,” Glisson said. “It’s a chance to give back to the community, to do some things. It was a time for our kids to give back, and have fun. So we enjoyed it.”

Glisson said he was appreciative of all those who helped make the camp a reality.

“It takes a fair amount of money, and it takes time and effort, and planning, and coaches giving of their time,” Glisson said. “This was probably the last Friday they would have off.

“So I’m very pleased and thankful for our coaches.” 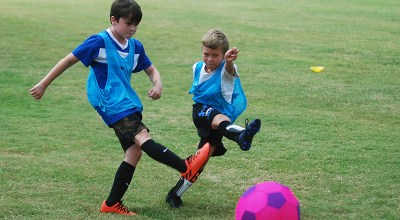 Troup ready for next stage