Students dress up for success 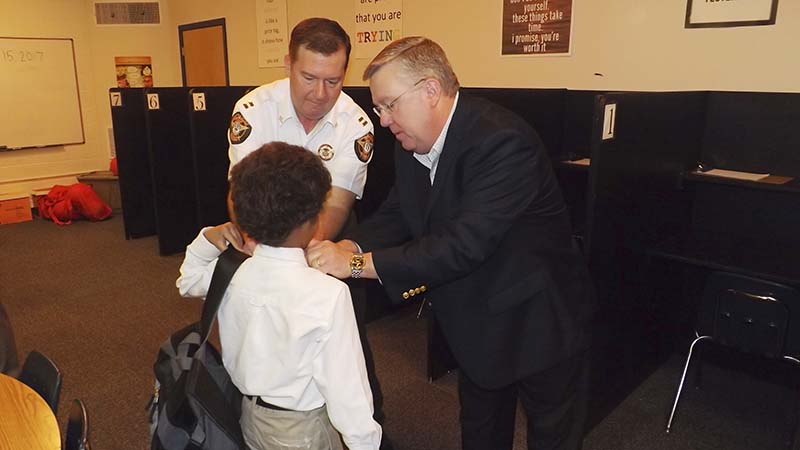 On Tuesday, the LaGrange City Council heard an update on Empowerment Wednesday, a locally run program that hopes to empower students by helping them dress up one day a week.

Empowerment Wednesday began with a small group of students at Whitesville Road Elementary School in 2016, asking them simply to dress up and wear a tie one day a week.

Cofield reports that within two weeks, the program had grown to include 42 students, and by the end of the school year, 125 students were participating in the weekly event and teachers saw grades and behavior improve. He hopes to continue to build on those results in the upcoming school year, and ultimately improve the community as a whole, but the entire process starts with helping a third, fourth or fifth grader fix their tie for the first time.

“It seems like a very simple thing, but it meant so much to those kids,” said Mayor Jim Thornton, who helped students at WRES with their ties one Wednesday earlier this year. “It meant so much to them, and you could see that they were excited about it. They were excited about this day to wear a dress, to wear a white shirt and tie, and you could read it all over their face. This was a big deal to them.”

Cofield said he bought all the ties available at Walmart on at least one occasion to keep up with requests from students who wanted to be part of the program but did not have their own ties. He has also had younger elementary students — including kindergarten, first and second-graders — request to join the program. Empowerment Wednesday has received some community donations of ties and other clothing like khakis that will allow children who want to dress nice to do so.

The program itself is becoming bigger than a once a week event though. Recent field trips include visits to THINC Academy, which trains high school students on skills that are in high demand like engineering, mechatronics and small business development. The academy is located on the main campus of West Georgia Technical College’s LaGrange location, and despite being just around the corner from WRES, according to Cofield most of the students did not even realize it was there or that it could be an option for them.

“At the end of the day those same 95 percent of students who did not know that THINC Academy is right in our backyard, 95 percent of those students were saying when we left ‘when I get to high school, this is where I want to come,’” Cofield said.

“I believe that if we can get the daddies on board and on the same page that I am on — and others are on — I believe that our sons will get on pace and on board as well,” Cofield said.

“I believe that we would see some of our crime levels go down in our community.”

Cofield is currently looking for a building in LaGrange that the nonprofit can use for additional programs that will pull in the fathers of students.

For more information about the program or to reach Cofield, visit Empowerment Wednesday on Facebook.