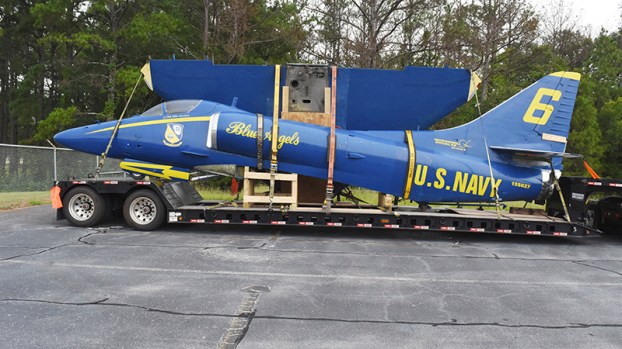 A Blue Angels airplane will be parked over the weekend at the LaGrange Callaway Airport. The airplane can be seen strapped to the back of a truck trailer. --Daniel Evans

A Blue Angels airplane will be stationed in LaGrange over the weekend before making its way to the Southern Museum of Flight in Birmingham, Alabama.

The airplane was picked up in Quonset, Rhode Island and is parked at the LaGrange Callaway Airport over the weekend. It’ll be taken to the museum on Monday.

It served two and a half years flying missions over north Vietnam, according to Wayne Novy, curator at the Southern Museum of Flight. One time this same plane had an in-flight emergency at Edwards Air Force base where the plane was going too fast on landing, Novy said.

He said this plane will be a great addition to those already on display at the museum.

“It will fit right in. We have a good number of military fighters from the 50s and 60s, so it fits right in there,” Novy said. “As far as being unique, it being a Blue Angel, it’ll be a unique addition to this collection.”

The museum in Rhode Island is closed, so the aircraft there needed a home, Novy said.

“The navy museum system owns this one and they’ll loan it out to museums,” he said. “They asked us if we wanted it and that was an easier answer.”

Whitworth back as pharmacist with Medicine Cabinet

LaGrange pharmacist Tommy Whitworth is back as full-time retail pharmacist with the Medicine Cabinet after a five-year absence. Whitworth worked... read more