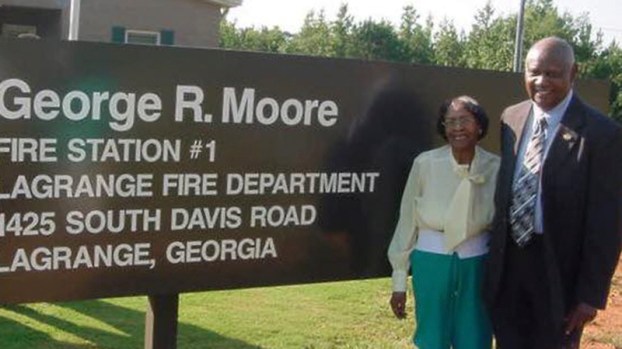 “Mr. Moore was one of the pillars of our community. I first knew him as a student at LaGrange High School where he was an administrator. I was able to observe him in community leadership over the years when he was a city council member, an active member of the Chamber of Commerce, and a leader at Warren Temple United Methodist Church. He was also a client of mine.”

“Both Mr. and Mrs. Moore were true jewels in our community,” current city councilwoman Norma Tucker said. “I can speak personally about how they blessed me. I owe a great debt to Mr. and Mrs. Moore, and have the greatest respect for him and his family.

The City of LaGrange recognized Moore for his decades of leadership and service to the citizens by proclaiming Fire Station #1 as the George R. Moore Station.

“Mr. Moore was passionate about everything he became involved with. He lived out his Christian faith through service to his community, never seeking personal glory but only what was best for LaGrange,” Thornton remembers. “He was a good man and someone I had the utmost respect for. He will be missed.”

“I am sad at his passing,” Tucker added. “But I know he is at peace with his wife, and their spirits are reunited in glory.”

A Blue Angels airplane will be stationed in LaGrange over the weekend before making its way to the Southern Museum... read more