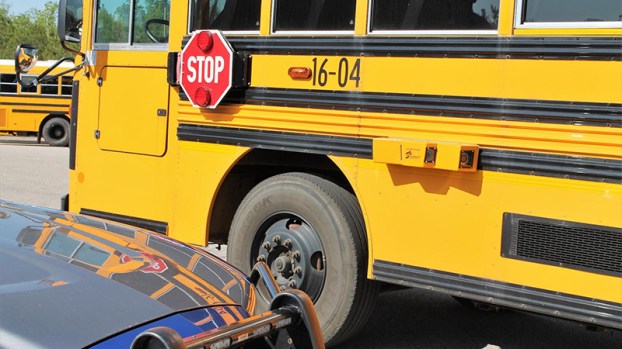 The Troup County School System is reminding drivers to stop when school buses are stopped.--Contributed Photo

As the new school year begins, drivers are being reminded to watch for stopping school buses during their morning commute. According to a Troup County School System press release, along with the sight of these buses comes mandatory traffic rules.

The school system is reminding everyone of public safety rules that are regularly enforced during the year and new procedures for the 2017-2018 school year.

These include the state law requiring cars travelling on both directions of the road to stop whenever a bus stops. Motorists can keep moving cautiously, but only when going in the opposite direction when there is an unpaved median, such as a grass median, or a concrete barrier separating both lanes. The school system partnered with local law enforcement and Gatekeeper System Incorporated in April to add security cameras to the top of buses that drive through high traffic areas.

These cameras catch cars passing the buses when the stop arm is activated. Yolanda Stephen, Director of Public Relations for the School System, said they have added these cameras to ten buses in April.

Stephen said the cameras are effective enough to take photos of drivers in their cars going the opposite direction of the buses.

Director of Transportation Doctor Jeff Turner said they hope the cameras will deter people from continuing driving while the buses stop.

“Our goal is to have zero offenses this year,” Turner said.

Buses will start warning when they are about to stop by flashing amber lights at the front and back of their vehicle.  All cars must stop then, according to the press release. Lastly, the release said cars must remain stopped until all children are 12 feet off from the roads in the afternoon.  Once the stop arm is pulled back in, drivers can continue on their travels.

A Night of Worship to benefit hospice

In September, Faith Baptist Church will ring with praise for a purpose during A Night of Worship, a benefit concert... read more