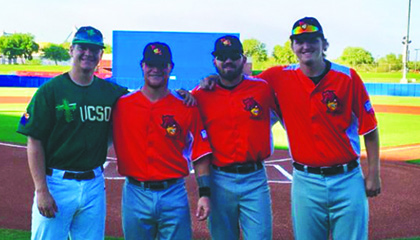 The Pecos League playoffs will continue today, with the High Desert Yardbirds taking on the Tucson Saguaros.

Blake Butcher, Blane Swift and Jonathan Fleckenstein play for the Yardbirds, while Eric Morrell is a pitcher for the Saguaros.

Butcher, Swift and Fleckenstein were seniors on the LaGrange College team that went 40-6 last season and won a conference championship, and Morrell was a senior on the 2016 team.

The Yardbirds and the Saguaros are both inaugural members of the Pecos League.

Morell, who went 8-2 during his senior season with the Panthers, has been perfect this summer.

Swift, Butcher and Fleckenstein have each enjoyed strong seasons for the Yardbirds.

Fleckenstein is a relief pitcher for the Yardbirds, and he is 4-0 with a 3.24 ERA in 16 appearances.