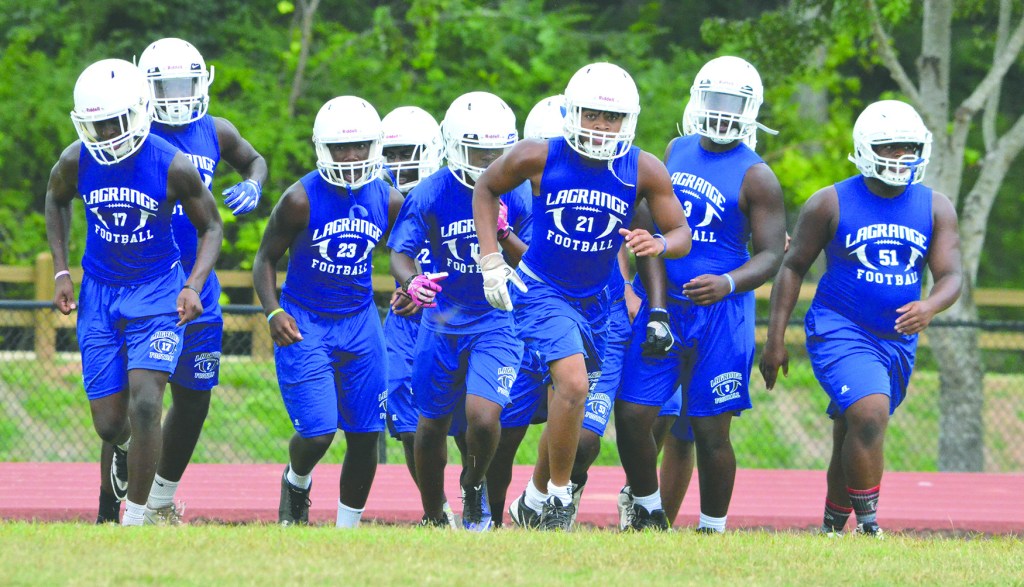 LAGRANGE – Blue will be the color of the night.

In a show of support for the LaGrange High football family, the Heard County fans have been asked to wear blue to Friday’s preseason game that will be played in Franklin.

It will be a “Blue Out,” and donation buckets will also be available to help the family of freshman Nar’Quevious Tucker, who died on Saturday night during a team incident at the LaGrange College pool.

Kickoff for the game will be at 7:30 p.m. at Heard County’s Staples Stadium.

It will be the Grangers’ lone preseason game before they open the season against the Callaway Cavaliers on Aug. 18.

It will be one of two preseason games for Heard County, which visits Chapel Hill on Aug. 11.

LaGrange, which is dealing with the tragic loss of the 14-year-old Tucker whose death has officially been ruled a drowning, returned to practice on Tuesday to continue the preparation for a new season that is a little more than two weeks away.

Before LaGrange plays rival Callaway, it will take a test run against Heard County.

Heard County is led by senior quarterback Emory Jones, who has committed to Ohio State.

Jones’ season was cut short a year ago when he was injured in the first half of a game against Callaway, but he’s at full strength now and ready to go for his senior season.

LaGrange head coach Dialleo Burks said it will be a great test for his defense.

“They’ve got one of the best quarterbacks in the nation,” Burks said. “Guys talk about next level, and I’m pretty sure (college coaches will) pack the house to watch him. It’s good to see that talent, and that’s what we try to prepare them for.”

The Grangers were originally going to play two preseason games, but that was before they decided to hold a spring practice after making some staff changes.

That meant LaGrange was limited to one preseason game, so it opted out of a game against Newnan.

“We had the influx of new coaches, and we implemented a new system, and we went to the Newnan family and asked if we could change the plans a little bit, because we really needed that spring to work,” Burks said. “And they agreed, so we’ll do some things on the back end to play them as well.”

Burks said the first half will be played mostly like a regular game, although there will be a quick whistle for the quarterbacks so they don’t get knocked around too much.

Burks said his starters will get plenty of playing time.

After playing Heard County, LaGrange will have two weeks before the opener against Callaway.

LaGrange is looking to turn things around after going 2-8 in 2016.