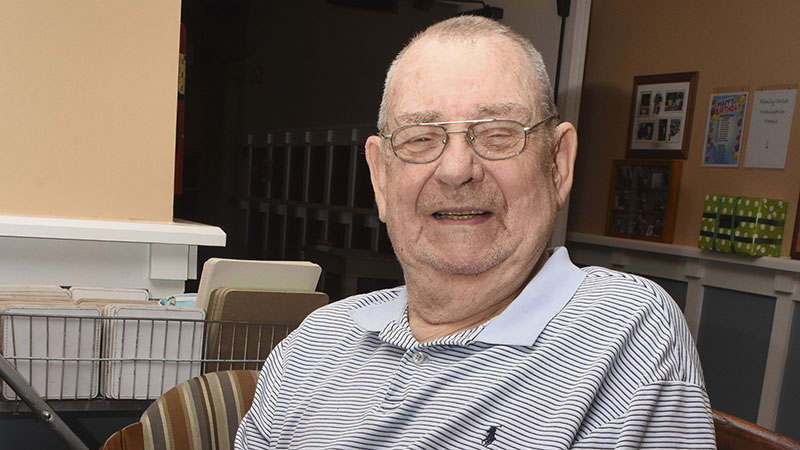 Bruce Smith poses for a photo at Vernon Woods on Friday. --Daniel Evans

When you write it all down, it’s hard to believe all of the different jobs and positions 86-year-old Bruce Smith has held in his life. The Air Force veteran served as a LaGrange Police Department officer in the 1950s, owned and operated both a sporting goods store and an accounting firm in LaGrange and worked for Marriott Hotels in Washington D.C., long before they were the Marriott we know today.

“I’ve been all around,” Smith said with a smile.

Smith graduated from Rosemont High School in 1948 and chose to join the Air Force in 1951.

“A friend of mine and I decided that’s what we wanted to do,” Smith said. “We just went to Columbus and signed up.”

Smith said at the time, he was concerned he was going to be drafted into an infantry position in the military, so instead of signed up for the Air Force. He worked with the Air Police in Augusta and then was stationed at Cocoa Beach in Florida, where he guarded missiles.

“That was a bad time in Korea,” Smith said. “We heard all kind of stories about guys being killed over there and everything. That was the main reason he and I joined the Air Force, was to stay out of the infantry.”

After leaving the Air Force after four years, Smith joined the LaGrange Police Department, where his father, Marvin, worked for more than four decades.

Back in LaGrange, he met his wife Alice. The couple recently celebrated its 61st wedding anniversary.

“[The key] is a good wife,” Smith said when asked about tips for a long, happy marriage. “She looks after me.”

After a few years working for the LPD, Smith decided he wanted to work for the FBI, so he and Alice left for Washington D.C. He was within two days from graduating from Southeastern University with his accounting degree and was set to apply for the FBI when he said the qualifying standard for the FBI changed.

Instead of the FBI, he went to work for Hot Shoppe, Inc., which later became known as Marriott. At the time, Hot Shoppe only had two hotels.

“That was the only two hotels Marriott had,” Smith said. “Look at them now. They are worldwide. I can’t believe it.”

After a few years, he returned to LaGrange and he opened up Johnson’s Sporting Goods in West Point.

“We didn’t make a whole lot of money but we had a lot of fun,” Smith said with a laugh.

After moving on from the sporting goods business in the 1980s, he worked as an accountant for Southern Ambulance and eventually opened up his own accounting business in LaGrange.

The business was called Bruce Smith Tax and Accounting and was open from 1987-2004.

His wife Alice is a retired nurse, a position that runs in her family. Her mother and mother in law were also nurses.  The couple has a son, Bruce Smith Jr., and a daughter named Joy. They’ve lived at Vernon Woods for the last four years and are enjoying it.

“This is a good place to be,” Smith said.