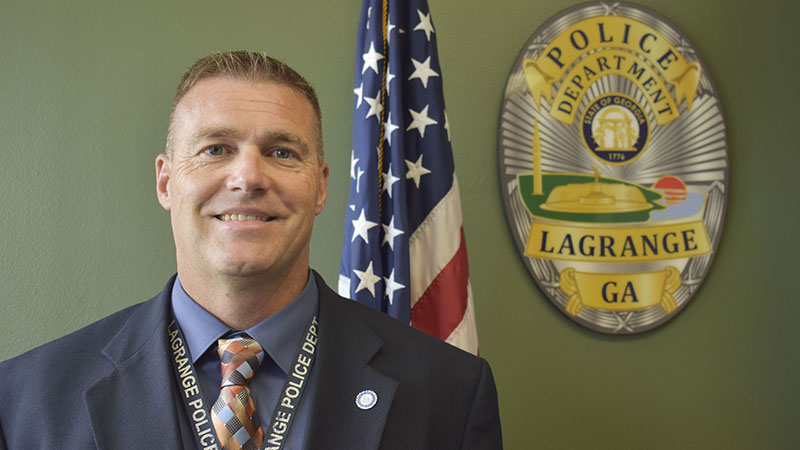 Lt. Dale Strickland is an investigator with the LaGrange Police Department, but in his spare time he likes to restore old tractors. He’s gone as far as Oregon to buy a tractor that he now owns. --Gabrielle Jansen

“I work with and do antique tractor pulls, so I take old, old tractors and refurbish them or try to make them as good as I can,” Strickland said. “Than we go to different places around the state and pull sleds. It’s kind of like a family event.”

Strickland said he started this hobby in 2004 after buying a tractor from Kansas. He said he went there during an ice storm to pick it up.

“I went to out Kansas and when I got out there it was snowing, and it was so cold,” he said. “It was so cold there, it wouldn’t crank.”

He has even gone to Oregon to pick up a tractor, he said.

“I’m still in the process of redoing that one,” he said. “It was a big tractor coming back, I had to deal with blowing out tires and climbing mountains and trucks overheating. They always seem to be an adventure when I go to buy them.”

A native of Meriwether County, Strickland said he grew up on a farm.

“[My family] grew up raising our own food, processing our own cattle, processed our own pork. At first it was pretty much a 50-acre farm where we did things at home. Later when I was in sixth or seventh grade, [we] started farming at a larger farm,” he said.

Strickland was always familiarized with farming equipment, he said.

“I started driving [tractors when I was] really young and of course working on the farm, driving everything from tractors to combines to grain trucks,” he said. “As I got older, I worked in construction where I ran loaders, excavator, you name it.”

A graduate from LaGrange College with a degree in criminal justice and a minor is psychology, Strickland worked as a probation officer for three years at the Troup County Juvenile Court before joining the LaGrange Police Department in 1997.

As a lieutenant, Strickland works with the criminal investigations section and drug investigator and building and maintenance and emergency services unit.

He said he always tries to prevent crimes in LaGrange.

“That’s one of the things I enjoy about my position is the goal of preventing crimes before they occur,” he said.

“Taking a case from having very little leads to having an arrest is a great feeling,” he said.

While part of him misses being outside on the farm, Strickland said he enjoys both his involvement in the field and in the office for the department.

“I’m not so far out of the hands-on stuff that it’s really dull,” he said. “I enjoy being able to do both.”