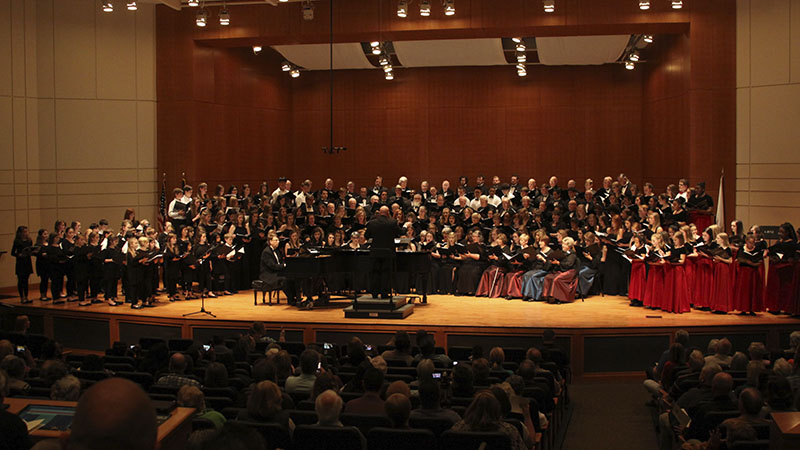 The 2016-2017 festival choir plays at Callaway Auditorium at LaGrange College in March. --Contributed

The Choral Society of West Georgia will start warming up next month for the 2017-2018 concert season.

The choral society believes that this year’s concert season will be packed with concerts that the group hopes will engage the community in not just the choral arts, but the fun that music can bring and even a little history.

“We have expanded our venue, and we are committed to the community arts for the West Georgia and the East Alabama area,” Artistic Director Bettie Biggs.

This year’s series will begin with a concert that is more fun than spooky, despite its Halloween theme and costumed performers. The second annual “Phantoms of the Organ” Great Spooktacular organ concert which will feature area organists — most of whom are regular players at their home churches — playing a selection designed to thrill.

“It is a seasonal offering for the community, and the organists play familiar pieces that they have chosen in coordination with fall and the Halloween season,” Biggs said. “We tried it last year and had a great response, so that will be our opening concert.”

The concert is coordinated with the Downtown Development Authority which hosts a community festival every year on a weekend near Halloween.

“The organists have a great time with it,” Biggs said. “They dress up as characters. They talk to the audience. They introduce their pieces. It is very family friendly, and it is very relaxed.”

The free concert will be performed at 7 p.m. at First Presbyterian Church.

The series will keep going strong on Nov. 18 and 19 with a Thanksgiving concert titled “We Gather Together” featuring First Baptist Bells. According to Biggs, the concert is a popular way for community members to kickoff the holiday season, and since it is scheduled for the weekend before Thanksgiving it will be the perfect chance to enjoy time.

“The Thanksgiving concert is really a community favorite because it really does start the holiday season for many people,” Biggs said. “It is a great time for reflection and remembrance. It is something that the singers themselves — it means a lot to them as well as the community.”

Songs that Won the War

On Feb. 24, the series will continue with “Songs that Won the War,” which will feature the big band, swing music that was popular during the 1930s and 40s.

“It is a tribute to the great music, the popular music of World War II,” Biggs said. “It is a venue that is used quite frequently in the U.K.”

The concert will feature local storytelling legend Carol Cain as Rosie the Riveter. Rosie the Riveter was featured in a U.S. government ad campaign during the 1940s that encouraged women to join the workforce in wartime production jobs, and Cain expressed her excitement at being able to reprise her role as the iconic character during the choral society concert.

“I truly appreciate history, and I enjoy sharing it and teaching it whether it is through a concert like this or through a storytelling performance or riding a float in a parade,” Cain said. “It is just a shared joy in helping people see the past and a way to both appreciate it and learn from it.”

The concert will give context to some of that history by filling in some of the gaps that students may not have learned about in history class such as the dramatic change in music style that came with the increased popularity of the radio that began in the 1920s and began to hit its stride in the 1930s.

“This was really the first time that commercialized music had been able to be accessible worldwide because of the radio,” Biggs said. “They focused on the nationalistic spirit of that time.”

The big band sound of that time will be brought out by the Auburn Knights who are scheduled to play alongside the choral society at the concert. The Auburn Knights Orchestra was formed at the Alabama Polytechnic Institute, which would later become Auburn University, in 1930, and has continued with the support of Auburn alumni for 87 years now.

“We are excited to play ‘30s and ’40s music and go back to our roots with ‘Songs that Won the War,’ like Glenn Miller, who was a huge artist back in the day,” Auburn Knights Manager Jayson Perry said.

The orchestra regularly performs songs ranging from Bruno Mars’ “Uptown Funk” to Stevie Wonder to big band music like that of swing era artist Glenn Miller, and the Auburn Knights have recently begun teaming up with swing dance groups to provide an even more show stopping experience.

“This kind of music is timeless just like Mozart and Beethoven,” Perry said. “It is also just like modern day Bruno Mars and the pop music that you listen to on the radio. Today’s hits — that is what we are going to be playing.”

Veterans of World War II will be honored at the concert.

On March 10, the society will offer its largest concert of the year, “The West Georgia Choral Arts Festival.” This will be the third year of the concert, and last year’s concert featured an approximately 275-member festival chorus made up of eight local choirs singing the final song to a packed auditorium.

“We have so many wonderful offerings here, and we have great choirs here, but you don’t ever have the chance to bring them together and have the opportunity to sing together,” Biggs said. “You’ve got little kids singing with 80-year-olds, and it is really a unique setting that we are able to offer, and we are fortunate that LaGrange College has been gracious enough to coordinate on this with us.”

The Choral Society of West Georgia will collaborate with the LaGrange College music department on the program, which will take place in Callaway Auditorium at LaGrange College at 4 p.m. This concert is free to the public.

The final concert of the season will be “A Southern Seranade” by Bel Canto LaGrange Women’s Ensemble on May 6 at 4 p.m. at St. Mark’s Episcopal Church. Bel Canto is a subset of the West Georgia Choral Society that focuses specifically on female choral artists.