Back to school for Troup County 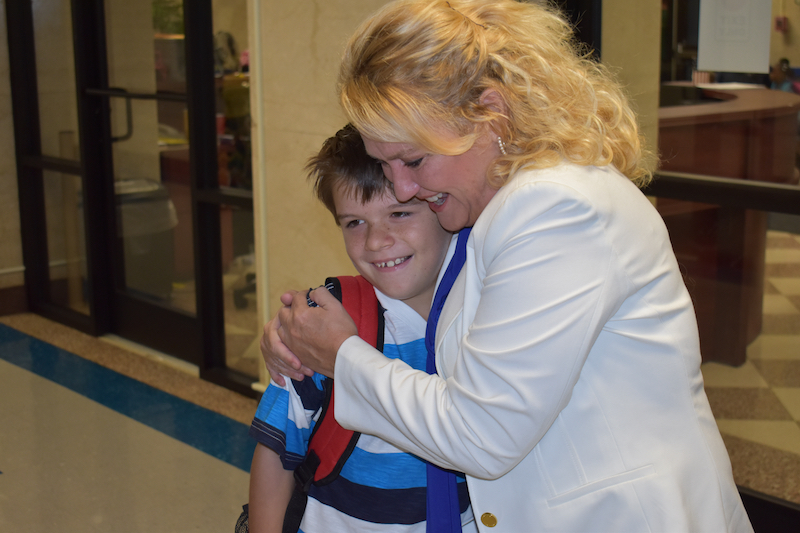 Thursday signaled the beginning of a new academic year for the Troup County School system. The 2017-18 school year began with a whirl of smiling teachers, excited students and hope for what the upcoming year has in store. The scene was similar across the 11 elementary schools, four middle schools and three high schools within the district, as students reunited with classmates and teachers.

Thursday also signaled the start of a new era at Berta Weathersbee Elementary School, as first-year principal Willie Cooks began the year by greeting students and parents entering the building. Cooks expressed that the nerves accompanying the first day of a new school year do not dissipate with age, nor does the excitement.

“Oh yes, you get that nervousness absolutely,” Cooks said. “But then there’s that excitement that overrides the nervousness, which is a good thing. We’ve got a lot of new faculty here this year, new kids coming in, so it’s a new beginning for a lot of us. I’m very excited to be able to change lives and touch lives. It is awesome.”

As students milled about on the opening day, four-year-old Chance Ramsay, sporting an outfit picked out by his grandmother, warily surveyed his surroundings as he entered the gymnasium, working his way toward his new kindergarten teacher.

Freshly-minted first grader Nicholas Shelton was unsure who his teacher was this year before walking into the building, but was interested in the breakfast options.

“I don’t know what the food is going to be,” Shelton said.

Kindergartener Noah Rumble did not have any fears for his first day, as he walked into his new school with bright eyes and a smile on his face.

Berta Weathersbee is attempting to turn over a new leaf after making headlines in June, when it was revealed the elementary school reported 35 incidents per 100 students, the seventh-most across the state of Georgia. In 2016, the elementary school’s CCRPI score was 55.9, the lowest in the county.

With this information in mind, the Troup County School System invested more than $200,000 over the course of the summer into the elementary school for upgrades to classroom equipment as well as the gymnasium. TCSS has also made room for a number of new positions within Berta Weathersbee in order to help remedy the issues that have been prevalent in the past.

Christy Nolan, first-year assistant principal and instructional specialist at Berta Weathersbee, is one of those new faces this year. Nolan beamed on opening day, and was ready to engage and mold the young minds within the halls of the school.

“This a new beginning with new opportunities,” Nolan said. “This is the first day to change the rest of the world, starting right here. We’re so excited to get started.”