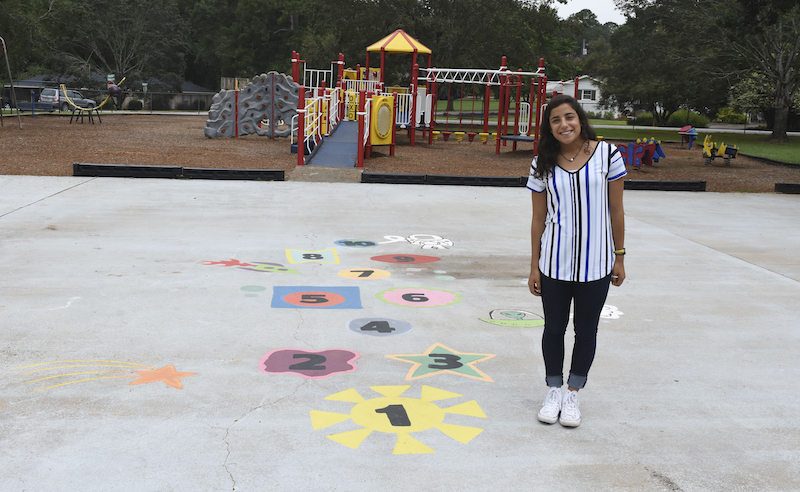 Camille Preston couldn’t help but smile Wednesday morning as she watched several children run around the  Granger Park playground. Several took a look at the park’s newest feature —a number jump — that sits near the sliding boards.

With rain on the way, only one of the children had a chance to skip through the numbers, which are in different shapes and colors, but many others have already had a chance to play Hopscotch on the mural in the past few weeks. Still more will get the chance for years to come.

That’s what Preston hoped when she painted the number jump as part of her Gold Award project for the Girl Scouts this summer. When she’s presented with the Gold Award early next year, she’ll be one of the only winners from Troup County in recent years, according to her mother Stephanie, who also leads Girl Scout Troop 19229. The Gold Award is the highest achievement in Girl Scouts.

“I’ve always really liked art and drawing so I knew I wanted to do something that had to do with artistic abilities,” Camille said. “I researched a lot to see what a need was that could involve art and also just giving back. I used this park a lot when I was young and I would’ve loved it if there was something like that, something colorful I could play with. Plus, it’s educational because it goes over shapes, colors and numbers and that stuff is critical for young kids.”

Camille spent the last year working on the project, including presenting the idea to the Girl Scouts of the USA in Atlanta and then sending a plan to Troup County Parks and Recreation, which oversees the playground at Granger Park.

Once she got approved for the project, she needed supplies. Home Depot donated all the special paint, which is for use outside and on concrete, and other donations covered most of her personal cost for painting the mural.

The actual painting took approximately a week, and the city of LaGrange allowed her to use temporary fencing around the mural while she was working.

Until Wednesday, she hadn’t had a moment to stop by to see the fruits of her labor — children playing on the mural.

“I feel very accomplished that people do enjoy playing on it,” she said. “It makes you happy because after you put in that much work, you would hope it gets played with.”

Before going for her Gold Award, Camille had to earn both the Bronze and Silver Awards for the Girl Scouts. She’s been a member of the scouts for 12 years.

Camille has been involved with Girl Scouts since the second grade. There are three girls remaining from her original troop, including Camille, but she’s the only one that has attempted to complete a Gold Award project.

When she’s not in school or working with the Girl Scouts, Camille is a competitive swimmer. She competes year-round and hopes to earn a scholarship to swim in college. She’s also a 4.0 student.

Her parents are Perry and Stephanie Preston.

Back to school for Troup County