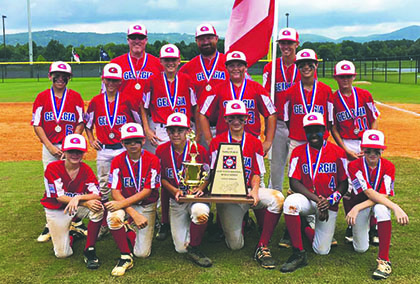 OXFORD, Ala. – The journey has come to a close.

More than two months ago, 12 players and three coaches came together to form the Troup National 11-12-year-old all-star team.

They were hoping to enjoy a winning summer, and they made that happen in a big way.

After winning the district and state tournaments, Troup National became team Georgia, and it continue to excel.

Georgia reached the semifinals of the Dixie Youth Baseball World Series in Oxford, Ala. before falling to Florida on Thursday morning.

That loss put an end to a remarkable summer for the team, which had a 13-3 record in the three tournaments combined.

Georgia opened the World Series with a 3-0 victory over Louisiana, and it fell into the loser’s bracket with a 7-0 loss to North Carolina.

Facing elimination for the second time this summer, Georgia responded with a dramatic 5-4 victory over Arkansas on Wednesday, with Colton Esposito hitting a walk-off home run in the bottom of the sixth inning.

Georgia followed that up later on Wednesday with an 11-7 win over Mississippi to become one of the last four teams standing.

Georgia was back at Choccolocco Park on Thursday, looking to move a step closer to a possible championship.

Instead, it was Florida taking the 9-4 win to advance, while Georgia’s hopes were dashed.

After the game ended, Georgia’s players were introduced, and as is tradition in Dixie Youth Baseball, they ran to the outfield to remove the stage flag from the fence.

Troup National began the summer with a dominant performance in the district tournament at the Harris Baseball Complex, winning all four of its games in convincing fashion.

At the state tournament in Roberta, Troup National lost its second game in pool play, and it beat Manchester to advance out of pool play.

Troup National then won all four of its games in the double-elimination portion of the state tournament to reach the World Series.