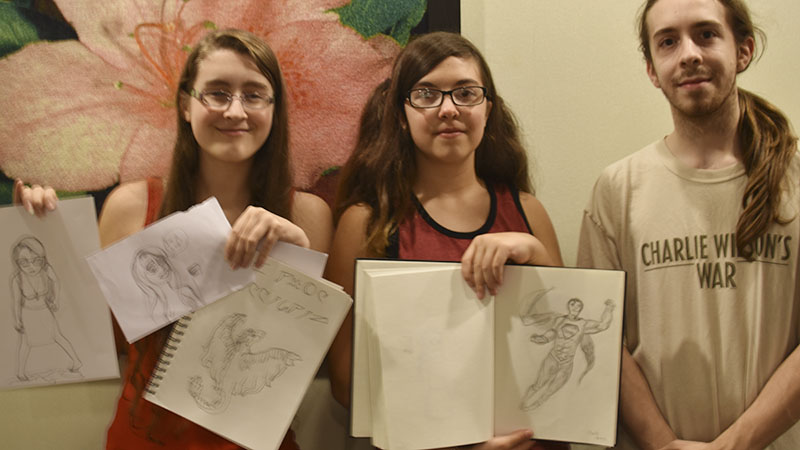 Manga Creator Club participants show off some of their creations on Wednesday. The club meets every other Wednesday at the LaGrange Memorial Library. --Baker Ellis

Every two weeks, the LaGrange Memorial Library hosts a manga creator club for those interested in creating their own comic books. The club has been meeting for approximately one year and has a consistent core membership.

“I let them maintain a lot of creative control in their drawings,” said Tim Crocker, director of the club and circulatory assistant for the library. “At the beginning of this club what I did was polled out genres, figured out what they liked in different books. We have gotten together and are working on a story, and I let them keep a lot of control with that.”

Manga is a style of Japanese comic books and graphic novels. The comics span a wide array of genres and have become increasingly popular in American culture over the past 20 years.

“Manga is different from American comics,” Crocker said. “They delve deeper into not only emotions but just perspective on everyday life. There are many different genres from slice-of-life, psychological, thriller, fantasy, romance, the list goes on.”

Two of the artists at the club Wednesday shared their thoughts on how they originally became involved with drawing manga comics.

“My older brother got me into anime,” said 15-year-old Evie Hare. “After a while I kind of branched off. I was still an amateur at that point. I enjoy the drawing and have delved into different styles that are influencing my style now.”

“One word, Beyblade,” said Lydia Harris, 12, when asked what drew her toward manga. “That show was my childhood. I loved it and I started drawing them. Of course, at first they just looked like stick figures, but as the years have gone on I’ve gotten better.”

The club meets every other Wednesday at the LaGrange Memorial Library. Meetings begin at 5 pm and last until 7 pm.