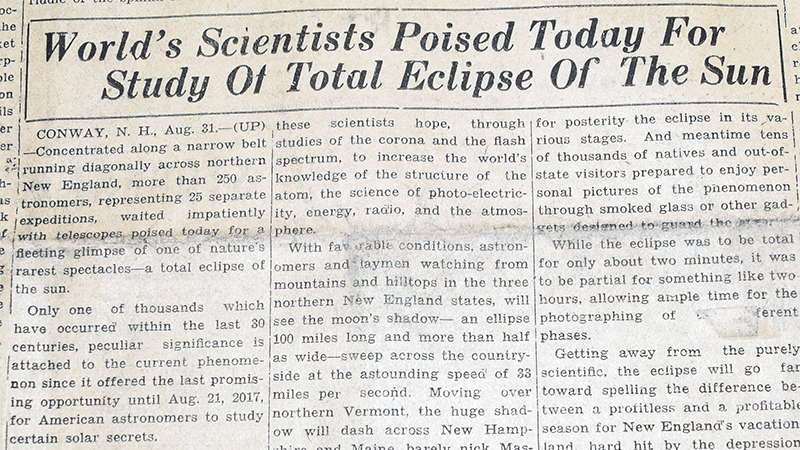 As the community prepares for the solar eclipse on Monday, some of LaGrange’s residents find themselves recalling past eclipses that have been visible in Georgia.

One eclipse from almost 85 years ago is still clear in the minds of a few residents who lived in LaGrange as children. On Aug. 31, 1932, Georgia experienced a partial eclipse that obscured more than 64 percent of the sun, during the Great Maine Eclipse of 1932. While northern states were more heavily affected, a significant portion of the sun being blocked out was an interesting sight regardless of the location.

“I remember that the sky got dark, and it was in the middle of the day,” longtime LaGrange resident Julia Dyar said. “I would have been frightened had daddy not prepared us for it.”

Viewing an eclipse without protective eyewear can result in eye damage or even blindness, so even before solar eclipse glasses could be purchased online, people still made a point of taking precautions when viewing the eclipse.

“He knew it was coming, and so he had gotten some of those little glasses,” Dyar said. “My brother and my sister — both of whom were older then I, they were not my only brother and sister, but they were the ones nearest my age — and I were in the backyard with my mother and father, and all of us had glasses on. I remember having to have glasses on to protect our eyes.”

For another resident, the eclipse is quite literally burnt into her mind.

“I remember my daddy was so excited,” Frances Hines said. “He was a lawyer, but he was basically a teacher. He was a wonderful teacher, and he was thrilled to have the children around that day.”

Hines was able to view the eclipse, but the view was not what made her remember the eclipse 85 years later.

“He was smoking glass so that (we could see the eclipse), and he didn’t notice that I had taken my shoes off, but I did,” Hines said. “I didn’t step in the fire because there was no more fire, but then I stepped in what had been fire. I was not hospitalized because of it. I just burned my feet.”

The LaGrange Daily News from that day also contained an article on the eclipse, which discussed the scientific discoveries that would be possible during the eclipse, as well as how the astronomic event would affect animals.

The eclipse that will occur on Monday was noted in the newspaper as the next solar eclipse with a similar trajectory that would occur in the United States.

“Concentrated along a narrow belt running diagonally across northern New England, more than 250 astronomers, representing 25 separate expeditions waited impatiently with telescopes poised today for a fleeting glimpse of one of nature’s rarest spectacles — a total eclipse of the sun,” the 1932 United Press Article in the LaGrange Daily News stated. “Only one of thousands which have occurred within the last 30 centuries, peculiar significance is attached to the current phenomenon since it offered the last promising opportunity until Aug. 21, 2017, for American astronomers to study certain solar secrets.”

Children observing the eclipse on Monday, will not have to wait quite as long for a good view of another eclipse as Dyar and Hines since the next total solar eclipse in North America will be on April 8, 2024, and the path of totality will span diagonally across the country from Texas to Maine.

Scientists have made important discoveries during eclipses including discovering Helium in 1868 and verifying Einstein’s Theory of relativity in 1919. Scientific observations will not be limited to just professional scientists though.

Even students and amateur scientists can observe scientific phenomenon during the eclipse like the apparent color of the land and sky, animals’ reactions and minor fluctuations in temperature during the eclipse.

The path of that eclipse cut across Florida and up the eastern coast.

In LaGrange, that eclipse obscured over 92 percent of the sun.

The eclipse in April 2024 will follow a similar path, and the 1970 solar eclipse was also discussed in the LaGrange Daily News along with recommendations that citizens build pinhole projectors to view the eclipse.

“As the eclipse begins there is no visible effect on the sun’s brilliance,” the 1970 article read.

“Then, slowly, the landscape becomes a bit darker. …The next eclipse comparable to Saturday’s will come in 2024.”