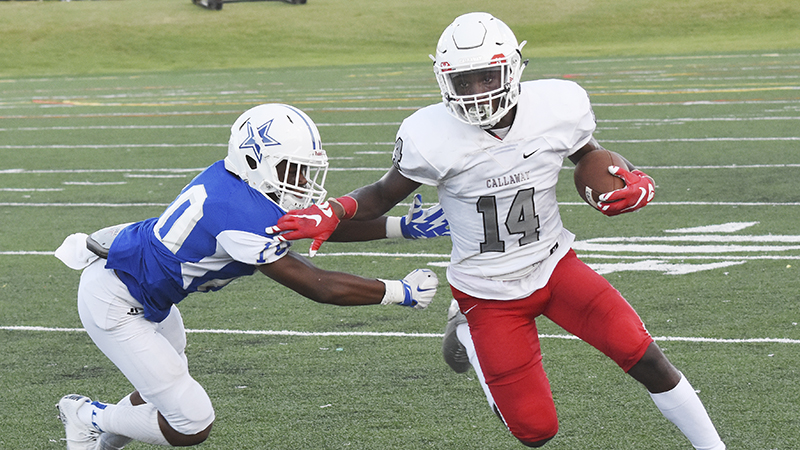 LAGRANGE – That’s 20 in a row. The Callaway Cavaliers opened the 2015 season with a loss to the LaGrange Grangers, and that’s the last time they tasted defeat in the regular season.

Callaway made it 20 straight regular-season victories with a 26-0 win over LaGrange on Friday night at Callaway Stadium.

It was the season opener for both teams.

“Our heads are up,” Burks said. “Even though we lost, our guys are encouraging each other for the next one. We didn’t have that last year. We saw heads down. You saw guys wanting to go their own way. That’s a sign of a good team. We’ll get it. We’re young but we’ll get it.”

It was a tight game for most of the first half.

Things began to turn in Callaway’s favor late in the second quarter.

With a little more than two minutes left in the first half, LaGrange lined up for a potential game-tying field goal.

Callaway’s Lichon Terrell charged through and blocked the kick, and DQ Wilkerson scooped the ball up and raced 50 yards for the touchdown.

After a LaGrange punt, quarterback Kedrick Ramsey hooked up with Courtney Williams for a 62-yard touchdown with 50 seconds left in the second quarter, and Callaway took a 17-0 lead into the half.

Ramsey added a touchdown run in the second half, and Callaway was awarded two points for a safety when the ball when out of the end zone on a blocked punt.

Noah Stephens made a field goal and two extra points for the Cavaliers, and Hunter Williamson also made an extra point.

“We feel good,” Wilkerson said. “But we can’t just settle. We’ve got to keep going and have another good season.”

The Cavaliers put the first points on the scoreboard with 7:42 left in the second quarter on a 23-yard field goal by Stephens.

Ramsey and DJ Atkins had back-to-back runs of 22 and 13 yards to put the ball on the Grangers’ 10-yard line.

LaGrange’s defense stood firm from there and forced the field-goal attempt.

Later in the second quarter, the Grangers made a big defensive play, with Jeremiah Holloway making the sack and forcing a fumble.

The Grangers took over at the Callaway 28-yard line, and the field-goal team trotted onto the field after they were unable to get a first down.

Terrell blocked the kick, and the ball bounced into the waiting arms of Wilkerson, who had nothing but green turf between he and the end zone.

Wilkerson crossed the goal line with 2:09 left in the half, and Stephens’ extra point gave the Cavaliers a 10-0 lead.

“I heard the crowd cheering and I thought I’m going to score,” Wilkerson said. “It just felt awesome.”

After LaGrange went three-and-out, Callaway took over at its own 38-yard line following a punt.

On the first play, Ramsey dropped back and let the ball fly toward the right sideline.

Williams had two defenders with him, but he made the catch at about the 15-yard line, and he raced into the end zone for the touchdown, and the extra point put Callaway ahead 17-0 with 50 seconds left in the half.

“Coach (Matt) Napier told me they were in a cover two,” Ramsey said. “He was like, keep the ball wide. I got out there and I saw Courtney get ahead of the dude. I trusted him so I threw it, and he made a big play.”

The Cavaliers thought they’d padded their lead in the third quarter when Kobe Jackson returned an interception for a touchdown, but that play was wiped out because of a late-hit penalty on the quarterback.

Jackson did have an interception in the first half.

The Cavaliers ended up getting the ball anyway when Nathan Sapp recovered a fumble midway through the third quarter.

Callaway embarked on a nine-play, 48-yard drive that ended with a 4-yard scoring run by Ramsey.

Williamson made the extra point, and Callaway led 24-0 with 55 seconds left in the third quarter.

The Cavaliers capped the scoring early in the fourth quarter when they blocked a punt, and the ball bounced out of the back of the end zone.

A botched punt attempt by the Cavaliers gave the Grangers the ball at the 13-yard line, but they were unable to take advantage of that field position, and they turned the ball over on downs.

Callaway ran one kneel-down play and the clock ran out.

Callaway is off next week, and it will return to action on Sept. 1 at home against Handley.

LaGrange will be back at Callaway Stadium on Friday against Villa Rica.