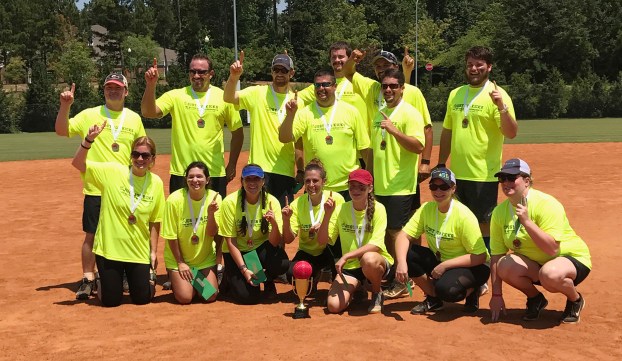 Callaway Baptist Church poses for a picture after winning the Not Just For Kicks, The Mother of All Tournaments kickball title Saturday. --Contributed

If the crowd and participation were any indication, Saturday’s Not Just For Kicks, The Mother of All Tournaments kickball event was a success, not only for the winners, but also for the First Choice Women’s Center.

Saturday’s tournament was the first of its kind in LaGrange, and it was meant as a fundraiser for the center, a ministry that assists women in LaGrange with unplanned pregnancies.

First Choice Women’s Center operates with an approximate $150,000 annual budget, and the goal through Saturday’s tournament was to raise $10,000.  Organizer Michelle Thompson was confident that the tournament had raised right around that amount.

“I think we’re going to meet our goal,” Thompson said. “Next year we are going to increase it because we plan to make this an annual event. We’re calling it the first annual because it’s definitely been a success. We have over 250 just playing and lots of spectators are coming out too.”

The idea for the kickball tournament came from Dr. Brett Bowie, the medical director at the clinic. He came up with the idea about five years ago, but this year everything came together to make it happen.

The Troup County Parks and Recreation Department allowed the ministry to use Shuford Fields for the tournament and many churches and businesses immediately wanted to take part.

The organization’s biggest fundraiser is an annual banquet in October of each year.

Some of the groups that participated had a chance to practice before Saturday’s tournament, while others put on their uniforms and worked out the kinks on the field. SEWON America was using the tournament as a chance for some fun outside of work.

“It’s always good to do some things outside of work because when you are on the clock, it’s strictly business,” said Terrence Meadows, senior supervisor at SEWON. “Any time you get out, let your hair down and have a little fun, it’s always good. It builds morale when you get back to work.”

This year the maximum teams allowed was 16 and several were on a waiting list. Thompson said next year the field is likely to be expanded to 24.

The Daily News’ weekly Neighbors series features one person from LaGrange and the surrounding area. This week we spoke with... read more