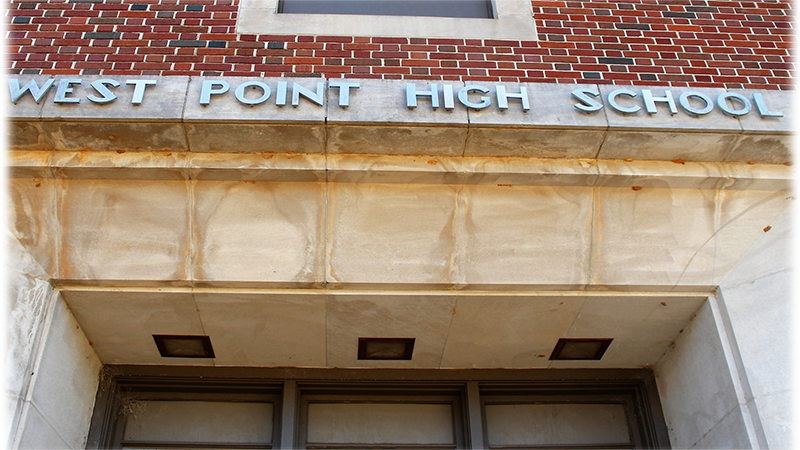 The West Point City Council voted unanimously Monday to move forward with applying for a $750,000 federal grant that would be used to renovate the old West Point High School.

Mayor Pro Tem Steve Tramell said the first step in renovating the building was to apply for a grant from the Georgia Department of Community Affairs.

“We’d like to renovate the old high school and in order to do that, we have to generate some kind of revenue from some paying tenant,” Tramell said. “We’ve got to at least go after and see if we can get the grant application approved. At that point, the city council will get together and decide the usage for the building.”

According to city manager Ed Moon, the total costs to renovate the first two floors of the brick building would be closer to $2.8 million.

“We have a $2 million gap basically. We will have to raise more money to do this project,” Moon said. “There’s a lot of people that would like to see this building saved and used and that’s our purpose.”

Moon said that to get the grant, it would be to have it declared as blighted.

“In order for it to apply for the redevelopment fund, it will have to be declared slum and blighted by the city,” he said. “The building is in pretty bad condition at this point.”

Tramell said the step after getting approved would be to find a tenant and use for the building.

“We should know more probably in the next 60 days,” he said. “Once we get approval, we’ll have to go back through the process with the council and determine a usage for it and that we can make it work. We have to have a paying tenant in that building to make this process work.”

Tramell said the council does not know what the building will be used for if they get the grant.

“Point University has expressed interest in using it as an early childhood education lab here. That’s certainly an option, but anything we do will take council approval regardless of who the tenant is,” he said. “We don’t need another building in this city that doesn’t generate revenue.”

Tramell said the building, while decaying, still has good bones to render it able to be renovated.

“It’s just a desire of the community to put the building back to use again. It’s a beautiful old building,” he said.

The high school was built in 1952 and was open for 34 years, according to Moon.

The building’s basement is currently being used to hold storage for the city’s recreation department, Moon said.

“I want the building to be a benefit to the community,” he said.