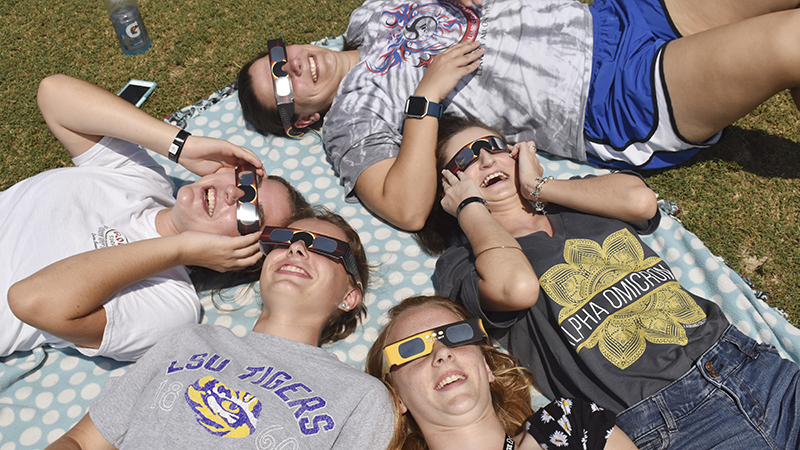 People around the country were in awe Monday as they watched the first total solar eclipse to go from the west coast of the United States to the east coast in 99 years.

LaGrange didn’t receive a full total eclipse, but the city received a 94 percent partial eclipse and many around the county made time to get outside and see it. LaGrange College and the LaGrange-Troup Chamber of Commerce each held viewing parties and LaGrange Academy allowed students to go outside and watch history.

In the parts of the country that received 100 percent totality, it got dark outside and stars were even visible. That wasn’t the case in LaGrange, with 6 percent of the sun’s rays still shining through, but it did feel like dusk.

It got visibly darker for a couple of minutes, although the fun was seemingly over as soon as it started. The eclipse started just after 1 p.m. in LaGrange and the sun was 94 percent covered at 2:36 p.m. A short time later the entire event was over.

“It’s a huge event because everyone has been talking about it. Just seeing it, it’s beautiful, but it’s also very overwhelming,” said Riley Whitlow, an eighth grader at LaGrange Academy. The sun is disappearing and the moon is covering it. It feels very overwhelming.”

The students weren’t the only ones excited at LaGrange Academy. Allen Pruitt had found the perfect shirt for eclipse day, one that he had bought years ago.

It showed the moon and the sun in a boxing match, with the moon delivering a knockout blow to the sun.

“This is one of the [old shirts] I didn’t throw away. I dug through my drawer the other day. I remembered it, and it’s one of the ones I kept,” said Pruitt, who has two children that attend LaGrange Academy.

Down the road at LaGrange College, many were seeing an eclipse for the first time. The college gave out solar glasses until it ran out, giving everyone a chance to see history.

“I think it’s a privilege to be in a time and place where you can see such a rare event,” said LaGrange College junior Nick McConnell. “Next time it will happen is going to be 2024, and it’s not going to be covering this area as much. Next time it happens, who knows where we will be. This is the first time I’ve seen an eclipse.”

LaGrange High seniors Bryson Smith and Will Roberts had their guitars out. They fittingly played Black Hole Sun by Soundgarden as a way to help set the mood.

“We just came to watch the eclipse,” Roberts said. “We were just going to come and play and hang out.”

Others were hoping to snag the perfect photo. Coleman and Kerri Vice made their own filters and tested their camera for an hour before the eclipse to line up the perfect shot.

“You never really know what you’ve got until you get back and you look at it,” Coleman said. “But if it turns out like I think it will, it will be one of the memorable things [I’ve done]. When don’t get to chance to practice, you don’t know if you’re going to get something cool or just a fuzzy mess but if it turns out, it’s something you can blow up and put on your wall.”

Fundraiser to help with medical costs