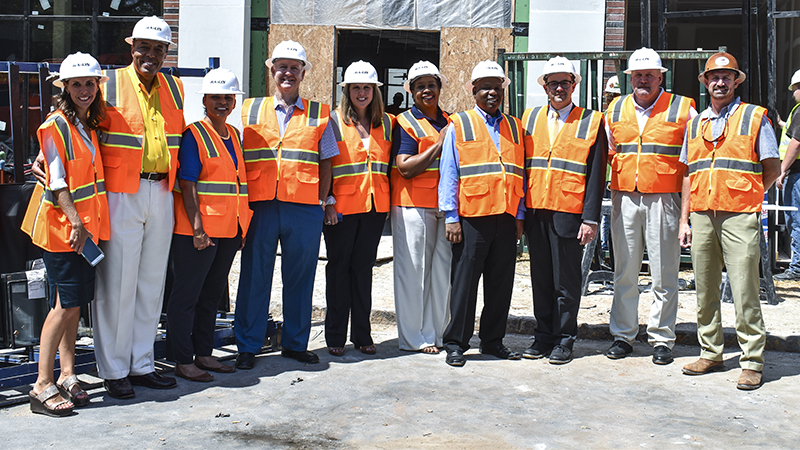 After Tuesday morning’s work session, the LaGrange City Council walked over to the Courtyard by Marriott hotel for a closeup view of the project’s progress. --Alicia Hill

On Tuesday morning, the LaGrange City Council viewed the progress on the Courtyard by Marriott in downtown LaGrange.

The project has made visible progress since the council last walked through the construction site in March. Many of the rooms on the top floors of the hotel now only need little furniture, fixtures and vacuuming. However, there is still a lot of work to be done before the 90-room hotel can open in December — later than original projections of October, due to the unusual amount of rain this summer. The hotel’s management team expressed excitement at being able to use that time to integrate with the community.

“Our goal is to not only be a successful hotel, but we want to integrate ourselves so much and enmesh ourselves with the community,” General Manager Gretchen Twickler said. “We are very community minded, so all of us have some history here. I grew up coming here every summer and every winter, so I am very familiar with what goes on in the summer and what goes on at Callaway Gardens, like Fantasy in Lights.”

The hotel hopes to embrace that hometown feeling, and team members noted that amenities, like the meeting rooms and the bistro, may serve the community as well as guests. Sales Manager Savannah Griner noted that at other Courtyard by Marriott locations, 60 to 80 percent of conference room use at the hotels comes from locals.

“The operations part is we want to keep that hometown feel that you all have now, and just make sure that we don’t lose that,” Twickler said.

“(That we don’t) lose sight of why you all are so valuable to the community, and why you are so special.”

One of the parts of the hotel that the city council has heard a lot of interest in is the coffee shop and bistro areas.

“The things that will be at the bistro are the restaurant that will operate and the Starbucks at this location,” Josh Chapman, president of Linco Development Company. “If you come in for a Starbucks in the morning, you can walk into the bistro, place your order, and they’ll make it right here for you, and there is also a bar.”

The bistro will serve breakfast and dinner. Marriott hotels generally do not serve lunches at most locations, since that is usually the quietest part of the day for hotels, according to Chapman.

Weather permitting, the hotel should be completed by Dec. 28. Employees will likely be hired six to eight weeks before opening. When jobs become available, they will be posted at Paramounthospitality.com under careers. The hotel also hopes to start taking reservations as early as next week.