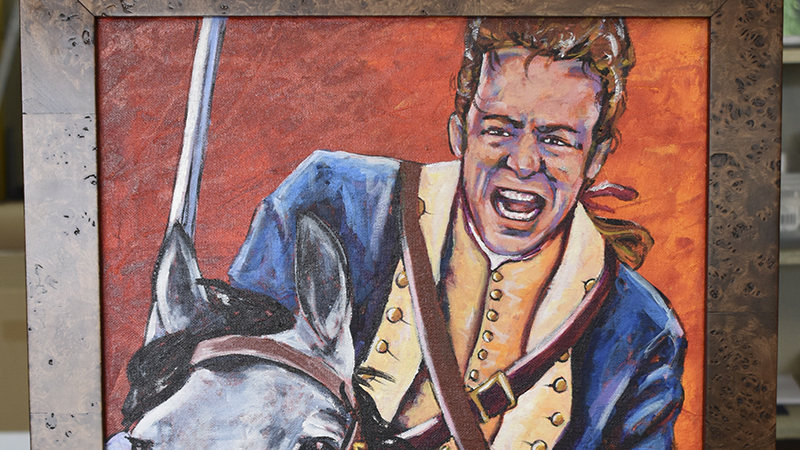 Thea McElvy’s painting of John Stark will be featured in the show. --Alicia B. Hill

When Dr. Richard Ingram began asking locals about the identity of the statue on LaFayette Square several months ago, he was surprised to learn how few people knew who Marquis de LaFayette was or why he is featured in such a prominent place in downtown LaGrange.

“He has a vision of letting people know how important LaFayette is to our freedom and liberty,” former LAM Board President Bobby Cammon said. “We came up with a project where he commissioned 23 paintings of Revolutionary War heroes, more famous and less famous (heroes).”

The show will bring to light some often overlooked men and women who helped make the American Revolution possible who, like LaFayette, are often forgotten.

“LaFayette was the single most important figure in the American Revolution, save for George Washington himself,” Ingram said during a Rotary Club meeting.

The grand opening of the Revolutionary War Art Project will feature professional reenactors who will portray figures from the revolution and music inspired by the period that will be performed by the Front Porch Collective Band. Ingram and Dr. John Tures will also speak at the opening on “How the Less Famous Really Won the War” and “Why LaFayette Matters.” Anyone who misses the grand opening will still ave the opportunity to learn about the Revolutionary heroes featured in the paintings. Information will be hung by each piece throughout the show’s time at the museum.

“There is a lot more text and history behind each piece (than usual at this show),” said Lauren Oliver, external relations coordinator for the LaGrange Art Museum. “The artist had to research these people and really study them, and that is the process of it.”

The grand opening will take place on Sept. 7 at 6:30 p.m. Lectures will begin at 7:30 p.m. Chef Jeffery Tucker will cater heavy hors d’oeuvres.  Tickets are $35 and can be purchased at Lagrangeartmuseum.org/tickets or by calling (706) 882-3267. The Revolutionary War Art Project will be open through Oct. 30.