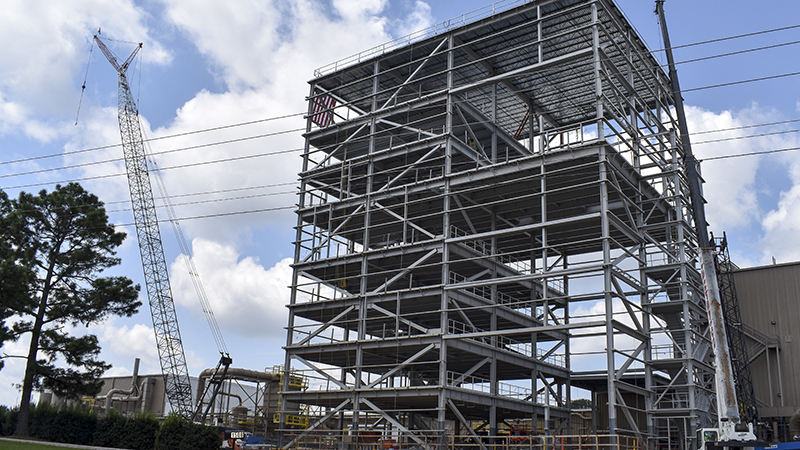 Duracell held a topping-out ceremony Wednedsay. The battery manufacturing giant announced its expansion in LaGrange in July 2016. The new facility will mean more jobs and the addition of both AA and AAA batteries in LaGrange. --Alicia Hill

Duracell hit a major milestone Wednesday, as the manufacturer celebrated the topping-off of its new manufacturing facility.

Duracell announced last year that its LaGrange campus will be taking over manufacturing of all AA and AAA batteries for Duracell in North America. By completing the roof for the new section of the manufacturing facility, Duracell moved one step closer to that expansion.

“It has been a long-term great relationship with the City of LaGrange, Troup County and the great state of Georgia,” said Patrick Bowers of Duracell. “We’ve had lots of success over the years.”

“Duracell is a great testimony to the relationship between manufacturers and the City of LaGrange,” Mayor Jim Thornton said. “Duracell has been in business in LaGrange since 1980, so for 37 years they’ve been making batteries here in our community. That is a tremendous tenure for any manufacture.”

Duracell has been using the same contractor for its expansions for 20 years, and while the new manufacturing facility will add jobs, the construction itself has brought jobs to the area as well.

“Obviously, it has tremendous impact on the local community and jobs that will go on for years and years, but when you are a company like O’Neal — and when you are Georgia Concrete, Piedmont Mechanical, all these craftsmen — this is very important,” said Kevin Bean, President and CEO of O’Neal. “The commitment that they (Duracell) make not just in time, but in cost has a tremendous impact to our companies. If you break it down, it puts food on our tables.”

LaGrange has seen a multitude of announcements regarding new business and industry in recent years, but city leaders were quick to point to the expansion of existing businesses as a clear sign of progress for the community.

“Even though we get excited about new investment in the community, I’m thrilled whenever an existing business chooses to expand,” Thornton said. “Duracell knows us. Duracell knows our community.”

Officials pointed to the expansion of existing companies as evidence of the city’s business friendly policies.

“There is no greater testament to a company’s belief in a community than a company that has been here since 1980 investing and bringing to the table for a long period of time,” said Scott Malone, the president of the Development Authority of LaGrange. “The commitment to advanced manufacturing is important. It is moving forward. That is what Duracell is doing. They are committing to the next generation of technology, and for communities to survive and thrive going forward, you’ve got to have a commitment to advanced manufacturing.”

“We are pleased that Duracell has decided to invest in LaGrange, and we are optimistic about the opportunities for jobs and future investment,” said Maggie Laton from the Georgia Department of Economic Development. “We appreciate their commitment.”

That commitment of both time and funds is expected to help the business as well as the community, as the LaGrange branch of the Duracell plant transitions to manufacture a large portion of the batteries used in the U.S.

“The investments that Duracell is making in this campus are critical to the long-term viability with battery manufacturing in LaGrange and Duracell as a whole,” Bowers said.

The new structure did face some rain delays, but contractors report that there is already a plan in place to complete the project on time.

“We’ve had a tremendous amount of rain, and those guys just work through it,” Bean said. “They deal with the balmy LaGrange weather. They are on schedule, and they are doing a great job.”

“What the state does from a training standpoint — the infrastructure that is being put in place — that is the commitment that the community has made,” Malone said. “We’ve decided that we are ready to grow and grow with the companies that are expanding in our community, and it is time for us to do that.”

Duracell announced the closing of its Lancaster, South Carolina plant and shift to manufacturing AA and AAA batteries in LaGrange in July 2016.