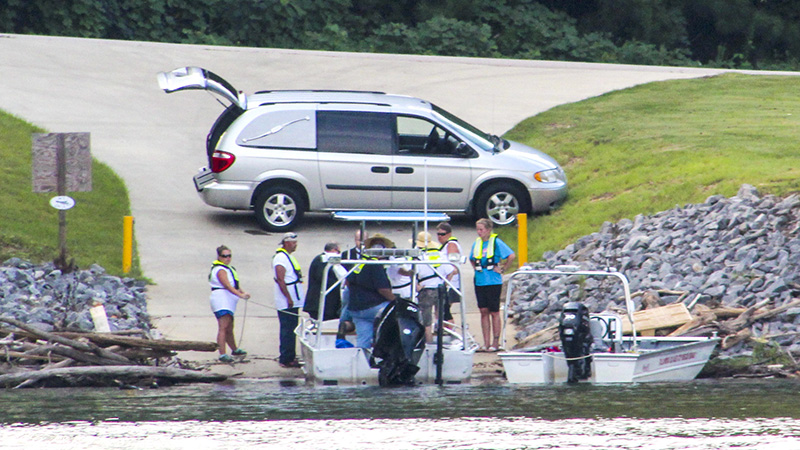 Search teams return to shore after recovering the body of 44-year-old Thomas Heulan Spence of LaGrange Sunday. An exhaustive six-day search by multiple agencies led to the discovery. (Mitch Sneed / The Outlook)

The body of a LaGrange man who had been missing since Monday evening was recovered at Alabama’s Lake Martin on Sunday afternoon.

After an exhaustive search by countless agencies and volunteers, the body of 44-year-old Thomas Heulan Spence of LaGrange, Georgia was recovered at 4:11 p.m. Sunday in the same general area where he was last seen.

Alexander City Police Department Chief Jay Turner said the 44-year-old man had no known health problems and was physically fit. At about 6 p.m. Monday, the pontoon he and four others were in was parked in a part of the north end of the lake near Camp ASCCA. Spence’s friends told officials that he was in the water and didn’t resurface.

Friday, dogs trained in cadaver recovery alerted divers to a presence not far from where the initial search began and teams restricted traffic in that area all weekend while diving.

Turner said that a presence was located using sonar and that led to the recovery.

“We are thankful that now the family can have some sense of closure,” Orr said. “It has been a very trying week for them and has taken a toll on everyone. We can’t say enough about the outpouring of support and the help from so many agencies, volunteers and individuals. There is no way that we can thank them all enough.”

“It was an incredible effort and no one ever gave up hope and literally searched non-stop,” Turner said.

Tents make it easier for special needs families to…