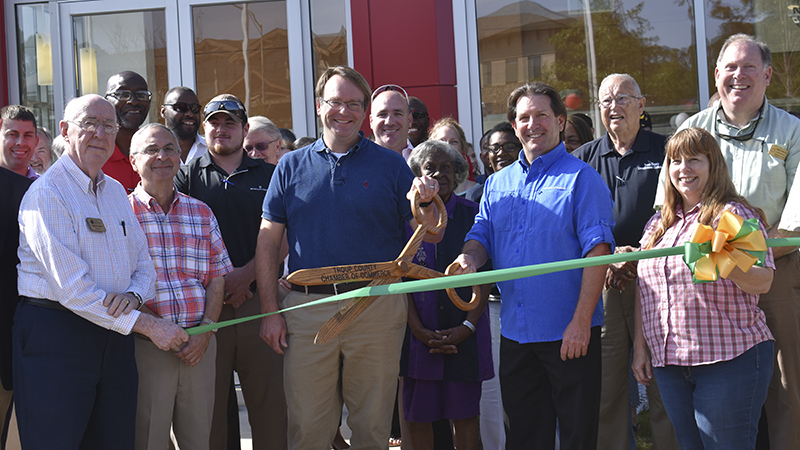 Nissan of LaGrange held a ribbon cutting ceremony to officially open the dealership’s new location on Lafayette Parkway Tuesday morning. The new dealership, which previously was located on Commerce Avenue, is complete now, but there was a moment in time where the future for the dealership was not so certain.

Nissan of LaGrange is co-owned by LaGrange resident Hutch Pine and Texas resident Travis Tadlock. The two have worked with Nissan since the 1990s, and began to work together after a stint as business competitors. They acquired the Nissan of LaGrange dealership in February of 2014, with a goal at that time of building a new location.

“We bought this dealership with the understanding from Nissan that we would move to a more visible location,” Pine said. “The day we moved in there (Commerce Street), we were scouring the city looking for places to go. We wanted a place our customers deserve and a place people could be proud to go to work every day, and this is it.”

Local business owners and public officials were gathered to celebrate the opening of the new dealership, with approximately 50 people in attendance.

“It’s been a long time coming, and you have shown such resiliency to get through every hoop that you had to in order to get to this beautiful location,” LaGrange-Troup County Chamber of Commerce President Page Estes said at the ceremony. “We are delighted that you all are here and have invested in this community.”

“You have done a fabulous job,” LaGrange mayor Jim Thornton added. “To see the transformation of this location into what is has become has really been impressive. This is really an asset to the city of LaGrange.”

For Pine and Tadlock and their Nissan family, the largest hurdle in the completion of the dealership came in the form of a Georgia Department of Transportation fee associated with expanding the already-present 24-foot highway access to 50 feet. This needed to be done for safety concerns and to provide a better egress-ingress for the property. Such an expansion brings with it a fee in the state of Georgia from the Department of Transportation, which was expected to be in the range of $15-50,000. When the fee came back at $270,000, the deal was in jeopardy.

“The deal with Georgia DOT almost derailed the whole process,” Tadlock said. “But after some cajoling of the DOT, some local politicians stepped in to help along with a few other folks. We got it reduced down to $150,000. It’s been a process.”

At the end of this long process, however, the new Nissan dealership is complete, and now the owners and employees can proceed with the business at hand.

“We’re really excited,” Tadlock said. “Now that it’s all over with we can take a sigh of relief and get on to the business of selling cars.”

Event to be an international affair