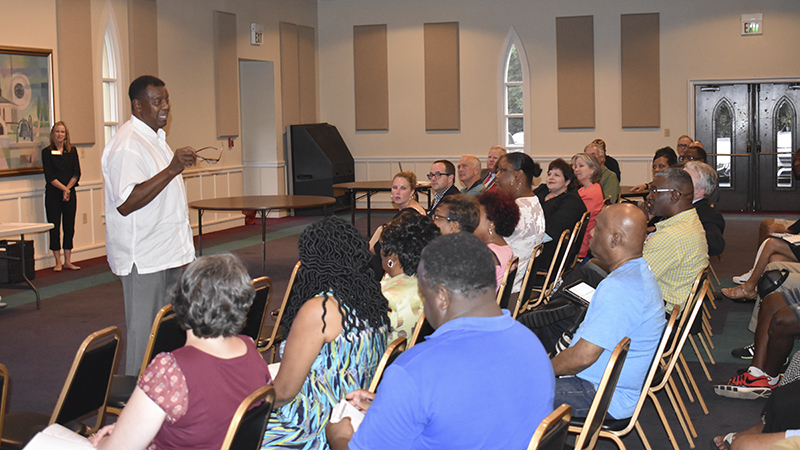 Members from the Georgia Conservancy were at Saint Peter’s Catholic Church on Tuesday night to share an outline of finalized plans for the revitalization effort of Calumet Village. Having the plans created and shared was part of one phase of a five-phase program created by the Calumet Village Neighborhood Association in an effort to bring support to neighborhood residents and stabilize the Calumet Village community.

The evening was long-awaited, as Dr. Robert Tucker, president of the CVNA, the CVNA board and LaGrange city officials have been working in concert with the Georgia Conservancy since 2016 in order to finalize the plans shared on Tuesday night. The process to develop these plans included public meetings, citizen surveys, coordination with the city of LaGrange and city officials as well as urban designs to identify a community-supported future vision for a revitalized Calumet Village neighborhood.

“In 2013, we were formally organized,” Tucker said of the CVNA. “The overall plan eventually evolved into a complete revitalization of the whole neighborhood.”

The area has a rich history as a mill village, and revitalization efforts hope to see the neighborhood retain its original sense of identity.

To this effort, the five-phase plan created by the CVNA has involved upgrading Calumet Park, improving general safety and street safety, providing job training, focusing on education from the pre-K level to two years after high school and improving housing within the community.

Katherine Moore and Johanna MCrehan were on hand from the Georgia Conservancy to share an overview of plans and suggestions created for the neighborhood as a part of this ongoing overall CVNA effort.

“We thought about what we were going to do, had an initial public meeting, interacted with city leadership and analyzed that information,” Moore said during the meeting.

“We had a survey that many of you filled out and began to get to our recommendation phase.”

The framework for the plan was broken out into four categories: those being character, commercial, housing and recreation.

Plans were shared to each of these four categories in an effort to help spur the ongoing revitalization. Short term plans and suggestions were shared, such as overgrowth management, maintaining vacant lots and adding bike racks to more long term plans, such as focusing efforts on programming activities in Calumet Park.

“This has been a labor of love, it’s taken a lot of time and a lot of commitment,” LaGrange Mayor Jim Thornton said of the entire revitalization project. “It’s really been a testimony to your dedication collectively for the neighborhood and the board members of Calumet Village.

“It is your dedication that has brought us here to this place. As mayor, I am very proud of what has happened in Calumet Village.”

Funding for the project was provided by the Callaway Foundation, and Callaway Foundation President Speer Burdette was on hand to emphasize the foundation’s commitment to partnering with city groups and organizations in strategic ways to benefit LaGrange and Troup County as a whole.

“The Callaway Foundation wants to be a part of partnerships, we like the idea of helping you help yourself,” Burdette said.

Dr. Tucker and the CVNA plan to get started with implanting the recommendations made by the Georgia Conservancy quickly, and hope to have some ideas in motion by the first of the year.

The entire re-envisioned plan can be found at Georgiaconservancy.org/blueprints/calumet.