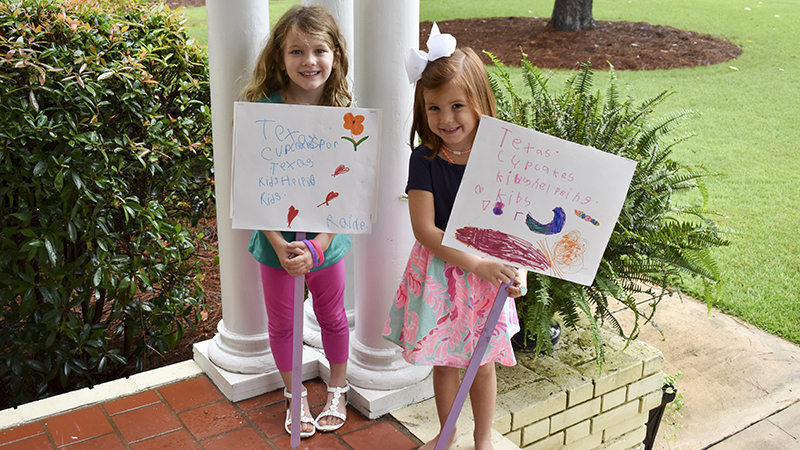 What’s in a name? That age-old question is meant to remind us that names are only labels and that if a person was known by another word, they’d still be the same.

But maybe there’s more to it than that.

Children at LaGrange First United Methodist Church are using their link with a church that shares the same name to send prayers and hope. The church’s pre-K through fifth graders are sending a favorite toy and a letter to children in LaGrange, Texas, which has been flooded by Hurricane Harvey.

“I’ve asked them to think about the most personal item that they have. What’s the one thing they couldn’t live without?” said Jeannie Jones, the director of children’s ministries at LaGrange First United Methodist Church.

Jones said she wants the item to be something valuable to the children, something that is extra special. She doesn’t want the children to buy something new and send it.

“I told them it has to be something of worth, along with a note saying why it’s important to them,” Jones said.

The people of LaGrange, Texas, like many other parts of the state, have been hit by hard by Harvey. Hundreds of residents have been evacuated as the Colorado River crests at its highest level since 1913.

Jones showed the children the clip of footage from Texas so that they could understand what the people there are facing.

“We watched a clip online that was from two days ago. It was showing the flooding,” Jones said. “I blacked out the room and had them sit in the dark room and I sprayed them with water. We turned off the air conditioning, and we talked about this is what these kids are coming home too. They have nothing, it’s hot, it stinks.”

The church is holding a bake sale next week so it can also send money with its donation to LaGrange, Texas. The children of the church will be decorating and selling cupcakes for $1 each in the fellowship hall from 5:15 p.m.-6 p.m. and from 5:30 p.m.-6:30 p.m. on Broad Street.

Springfield Baptist Church in Hogansville is combining with 10 churches in LaGrange and Newnan to hold a supply drive. Church member Vanessa Cutwright said the drive will take place from 10 a.m.-2 p.m. and 5 p.m.-7 p.m. on Sunday.

A group will leave Tuesday with donations and will be headed to Houston, Texas. The supplies will be dropped off at St. John Baptist Church in Houston.