94-year-old Mappin not slowing down 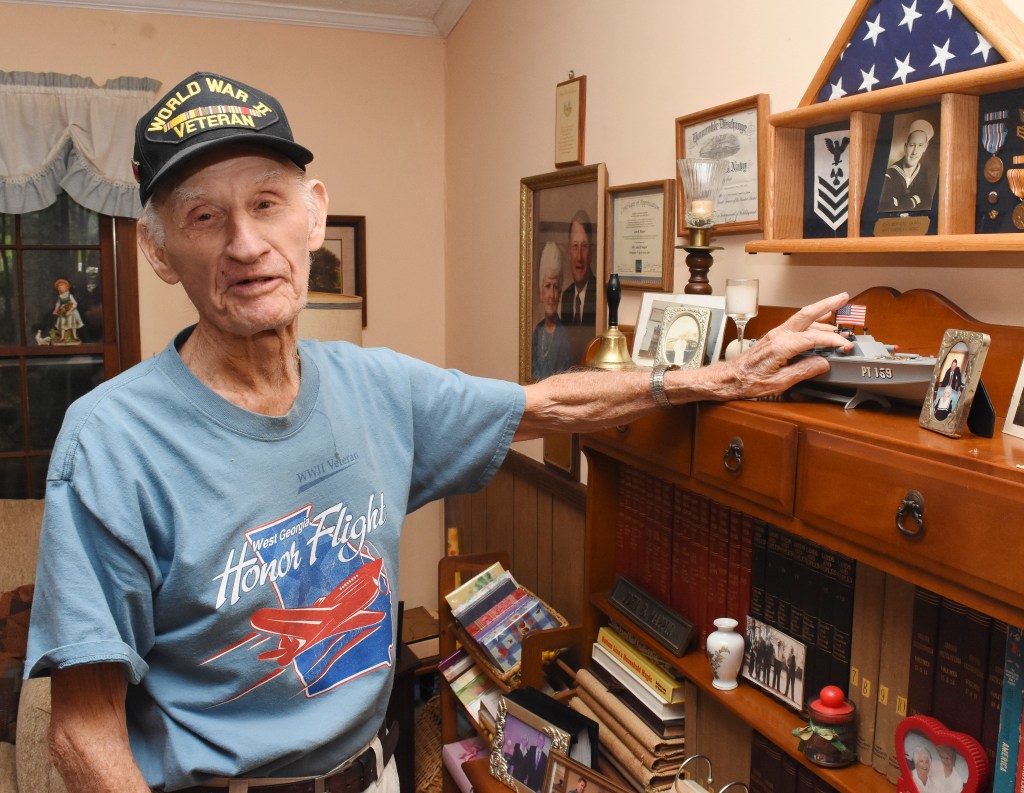 Frank Mappin doesn’t look his age, and the World War II veteran refuses to act it either.

Mappin, 94, still drives to the store regularly and walks down to the lake — which sits right behind his house — and moves limbs. His wife Joan said he pretty much does whatever he wants, with few limitations.

“I shouldn’t brag about this but [our doctor], he said I’m in better shape than any of his patients my age. I told him if you can’t find anything wrong with me I’m going to quit coming to see you,” Mappin said with a laugh.

Mappin served in the Navy in World War II. After the attack on Pearl Harbor in December 1941, he knew he was likely to get drafted into the Army. Instead, he signed up for the Navy, where he served as a motor machinist first class in a squadron PT boats.

“It was [scary] because you didn’t know what you were getting into,” Mappin said. “When they assigned us to PT boats, I knew that wasn’t good because you don’t have much protection in those things. We lived in close quarters down there. All of us jammed in one room.”

He spent most of his time in the boat’s engine room.

“We had three big engines and a generator and we had to keep the generator running because that’s where all the power from the boat came from,” he said.

He remembers one night where his boat was struck by a torpedo. Three men in the 11-member crew died that evening.

“We traveled at night as close to the island as we could get without getting hit, but that night we got hit and had to abandon ship,” Mappin said.

He said the survivors swam a quarter of a mile before being picked up by another boat.

His squadron was also later selected to be what Mappin called a suicide squadron. He said they were told to load all the boats up with rockets and go into Pearl Harbor, where they would restock the base.

“They said go in there and unload everything you’ve got and hope you get out,” Mappin said. “But the war ended [first].”

He has a spot in his living room with a photo of a 20-year-old version of himself, taken when he joined the Navy. He also has a flag that was flown over the U.S. Capitol in his honor and a scaled down version of a PT boat.

“There was five of us boys,” he said of his siblings. “All five of us were in the service. I was the youngest, and I was the only one that saw any combat.”

After being discharged from the Navy, Mappin attended Emory University, where he graduated with a degree in business administration. He went on to work for C&S Bank, which is now Bank of America.

John and Joan have been married for 45 years. They had both been married before, but both of their spouses had passed away.

The first time John asked for a date, Joan told him no. The second time he didn’t ask.

“I just told her to be down in front, and I’d pick her up,” John said.

The couple moved to LaGrange after retirement in 1981.

“When they opened this subdivision, I bought the first lot in here,” he said.

He’s spent as much time on the lake as possible since then. In two months, he’ll turn 95, but he doesn’t plan on slowing down.