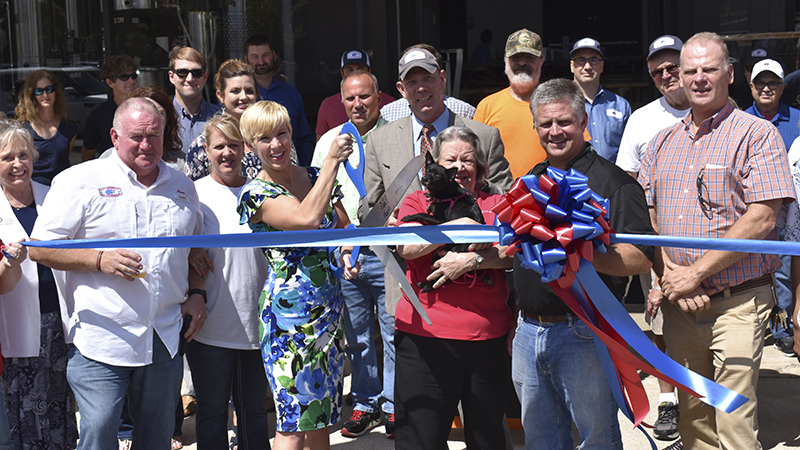 Chattabrewchee Southern Brewhouse owners Kathy (with scissors) and Mike (in hat) Denehy smile as they cut the ceremonial ribbon for the new brewery on Sept. 1. (Baker Ellis | LaGrange Daily News)

WEST POINT – Michael and Kathy Denehy cut the ceremonial ribbon to open Chattabrewchee Southern Brewhouse on Sept. 1. The brewery, located in downtown West Point, is the culmination of more than four years of working, dreaming and planning from the husband and wife duo.

The Denehy’s are a military family. Michael retired from the Army as a lieutenant colonel, while Kathy is an active-duty major in the Army. Kathy’s active duty status makes Chattabrewchee the only brewery in the United States that is owned by an active-duty female in the military.

“My wife is the only active duty female in America to own a brewery,” Michael said. “There are near 6,000 of them (breweries), and you are standing in the only one. She is an inspiration to every single person here.”

The couple has been seriously pursuing the idea of a brewery for approximately the last four years. Even predating that however, the idea to one day own their own brewery was forming in their minds.

“This idea started several years ago, but even before that, Mike decided to make some beer,” Kathy said. “Then, somewhere down the road we just started kicking around this crazy idea, ‘What if we opened a brewery one day?’ Somehow the joking aspect of it started to melt away.”

Chattabrewchee has a self-serve tap system, making the brewery the only such establishment within a 400-mile radius that operates in such a way, according to Michael. The brewery does not have a kitchen, but does offer pick-up service from local, West Point restaurants.

The brewery is located in the space formerly occupied by the Recline ‘N’ Sleep Plus furniture store, and all furniture in the building has been hand made.

“We’re so excited to have Chattabrewchee Southern Brewhouse open in the city of West Point,” Ashley Crane, Executive Director of the Greater Valley Area Chamber of Commerce said. “I think this is going to be an opportunity for our community to learn about beer in a way that has never been presented to this area. Not only is this a great time to meet with your friends, but you also get to have a little education about beer as well.”

The brewery currently has six beers on tap and will soon expand to 12. Head brewer Barry Stephens, also a local fireman, met the Denehy’s through a mutual friend. Stephens has been home brewing for the last five years, and has won multiple medals and competitions for his various beers.

“Barry makes the best beer in the world,” Michael said. “I firmly believe that.”

For more information on Chattabrewchee, visit the brewery’s Facebook page at Facebook.com/chattabrewchee/