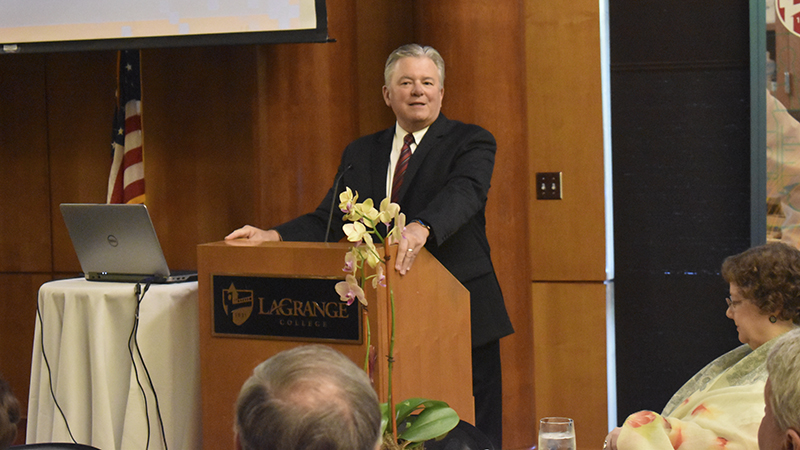 LaGrange College president Dan McAlexander delivered the annual Presidents’ Breakfast Address to faculty, friends and community supporters Thursday morning in Turner Hall on the LaGrange College campus. During his speech, the 25th president of the college focused on the college’s recent growth and impact, both from an institutional and community standpoint, and looked to the future growth the college expects to have in the coming years.

McAlexander has served as president of the college since July of 2009. In that span, he has overseen a number of changes and improvements. Following the economic recession in 2011, the college placed a concentrated effort on restoring certain elements of the infrastructure around campus.

“If we go back to 2011, I will remind you we were just coming out of a terrible recession, and we had just finished a major campaign,” McAlexander said.

“It wasn’t exactly the time to start with something big. But we recognized we has some absolute jewels of buildings that had fallen on hard times.”

After the decision was made to focus on building restoration, $1.1 million was raised to restore the Lamar Dodd Art Center, which was completed in 2011. In quick succession thereafter, the Broad Street Apartments were purchased with the help of the Callaway Foundation, the Price Theater underwent a $2.9 million renovation, the old West Side School building was purchased and renovated for $4.4 million and a fraternity court was installed for $900,000.

Most recently, the Cason Callaway Science Building has undergone a $4 million renovation while the Ida Callaway Hudson Lab Sciences Building has been constructed to the tune of $17.2 million. Total construction costs since 2011 are $37.6 million, and there is now approximately 250,000 square feet of new space on campus.

“Think about the impact this has had on our community,” McAlexander said. “Right around a quarter of a million square feet that we now have for the use of our students and for the use of the community. Construction is one area where we have grown substantially.”

In addition to construction growth, enrollment at LaGrange College has also continued to grow during the last five years. This year’s freshman class is the largest in the history of the school at 277, while the school has also accepted more transfers this year than in any other year with 98.

“We had about 196 new students per year in our first five years,” McAlexander said. “Now, our five-year average is 259 new students coming to campus.”

As LaGrange College continues to expand its footprint throughout the southern United States and across the country, McAlexander and staff remain committed to upholding the institution’s principals.

“We believe in our mission, and we believe in our vision,” McAlexander said. “To inspire, to challenge minds, to support students all so they will become successful, responsible citizens who aspire to lives of integrity and moral courage. Has there ever been a time in our nation’s history where that statement was ever needed more?”

Hotels filling up in LaGrange as people evacuate Florida