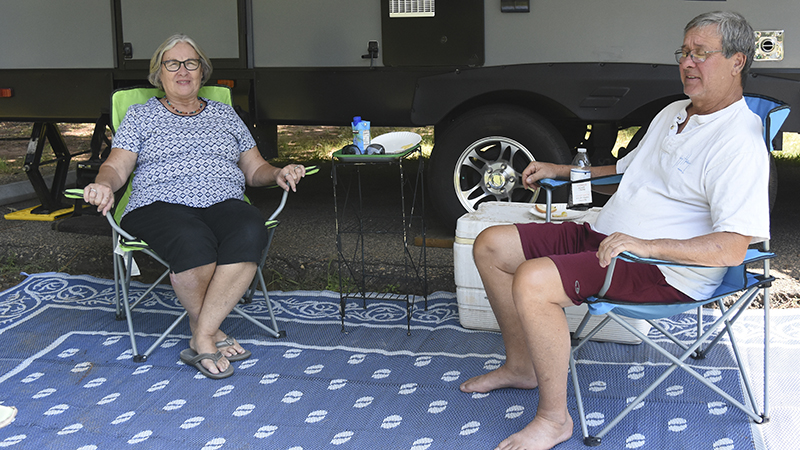 Bill Biossat and Darlos Biossat sit outside their camper Friday afternoon at Holiday Campground. The couple evacuated from Loxahatchee, Florida, which could receive some of the worst conditions from Hurricane Irma.

Evacuees have come from all over the place — West Palm Beach and Marianna, Florida and Jesup, Georgia — to escape Hurricane Irma, and for at least a few nights, they’ll call Troup County home. Then, they’ll head back and hope for the best.

Holiday Campground reopened Friday and is allowing those fleeing the hurricane a free place to stay during the storm. Most were prepared to sleep in campers, but others had tents.

“I’ve lived down in Florida all my life so this is not my first rodeo,” said Bill Biossat, who left Loxahatchee, Florida with his wife Darlos on Wednesday. “I’m 70 and she’s 69, and we decided we’re too old to be going through all the stress.”

When the Biossats left their home, they thought they’d be back within a couple of days. A 16-hour drive with multiple traffic stops and a couple more checks of the radar have changed their mind. Loxahatchee, which sits about half an hour from West Palm Beach, is near the Atlantic coast and figures to get the brunt of Irma when it makes landfall Sunday.

On Friday, the Biossats made a trip to LaGrange to a grocery store so that they had food to get through the weekend.

“We went through Andrew. That was about as bad as it gets. We’ve been through every one in Florida. We went through two in one year in Florida, but none of them give me the anxiety this has,” Bill said.

Bill and Darlos were a few miles north of the worst of the damage when Florida was hit by Andrew in 1992, and they still remember it vividly.

“The devastation was unbelievable and this being worse than that, we decided it was time to move on up and get out,” Darlos said.

Bill used to be a state law enforcement officer in Florida, so he’s seen it all. This time around he wasn’t taking any chances.

“This is like super anxiety. This is massive,” Bill said.

Lawrence Pasciuta has lived in Jesup, a small city in southeast Georgia, for more than a decade, but this is the first hurricane he’s been through in the south. He and his wife Jan and his granddaughter Gianna left this afternoon.

They were asking for directions when someone told them to stop at Holiday Campground. Once they got unpacked, they found out the forecast shows LaGrange receiving wind and rain off the hurricane on Monday or Tuesday.

“It’s supposed to come here when, Monday?” Lawrence said. “I might be leaving. Leave here maybe Saturday and try to get away from it.”

He said if the storm heads for LaGrange Monday, he’s not likely to stick out it out in his camper.

“I don’t like [hurricanes]. They kill us. I’ve been in some in New York but that was my younger days,” he said. “What they do to these other places, what [one] just did to Texas. And with these things,” Lawrence said while pointing to his camper, “you’d be better off standing outside.”

Chip and Jud Gilmer weren’t prepared to take any chances either. The couple lives in Marianna, Florida but Jud is originally from Pine Mountain, so they decided to drive their camper toward LaGrange.

“We had a bad storm Tuesday night and my neighbor has a big live oak and it lost a limb,” Chip said. “I went out and started looking at all these oak trees and the wind is going to be coming east to west. The trees are on the east side of the house. I looked up at them and I looked at how they hung over the house and I said ‘nope.’ I packed everything up, took down the hummingbird feeder, the bird feeder, the wind chimes and battened down the hatches and called my hubby over here and said ‘get the camper ready.’”

The four members of the Shepherd family were prepared to sleep in tents on Friday night, but they were going to hit the road Saturday. They had left Venice, Florida, which sits on the Gulf of Mexico side of Florida, to seek shelter from the storm.

Wayne and Rose Shepherd and their two kids were walking their dogs Friday afternoon trying to figure out what their plan was. They’d packed tents just in case, but hadn’t planned to actually use them.

“We will probably camp out tonight, then head up to some relatives I have in Kentucky,” Wayne said.
Holiday Campground is operated by the U.S. Army Corps of Engineers and has 112 campsites. The park closed Tuesday, following Labor Day, but reopened 60 of its campsites for evacuees.

“Once those all fill up, if they do, we will expand to other parts of the park,” said park ranger David Barr.

Ron Laurence, a volunteer at the park, said there were eight campsites with people in them early Friday afternoon.

“We’ve had probably 100-150 phone calls of people asking information, asking for an address to come here. Whether they will show up or not, I don’t know yet,” Laurence said. “We’ve had calls from the city of St. Mary’s,[Florida]. Their shelters were full. And the city of LaGrange has called to see what they can do.”

Laurence said they are accepting donations, if anyone would like to give bottled water or other necessities. He said he expected at least 40 people to camp at Holiday Campground Friday.

Barr said they are also warning people that the weather could get bad in LaGrange, if the storm stays on its current track.

“These people that are here in the park now, we’re trying to communicate to them to let them know the weather is going to be bad here — just not as bad as where you came up,” Barr said.

The incoming weather is only a part of the puzzle those who evacuated were having to weigh Friday. Some were second guessing whether they wanted to go further west, while others were just thinking of home.

“I keep saying what are we going to do, but all you can is call your kids every hour and try to keep them calm,” Bill said. “You don’t feel like doing much because you are so worried. You can’t enjoy anything. You can’t get your mind off of it. We’re dodging which way to go now and I think we’ll just suck it up and whatever happens [happens]. I’d just as soon be one place, gut it out and make the best of it.”

Federal DUA should be available to counties impacted by…