Bark at Park all about the dogs 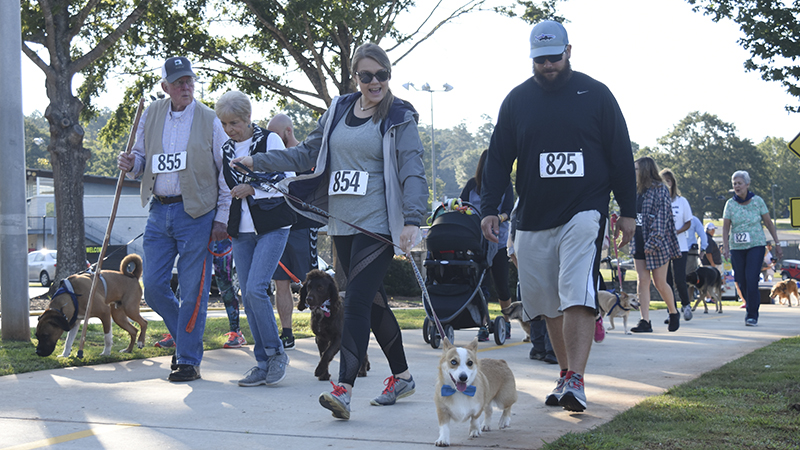 Many people walked their dogs during the Bark at the Park 5K and Dog Walk. --Daniel Evans

Saturday’s Bark at the Park 5K was definitely an event for the dogs. People all over LaGrange brought out their fur babies for some fun outside at The Thread, while also raising money for a good cause.

All money from the 5K and dog walk benefited the LaGrange-Troup County Humane Society, which had eight dogs available for adoption Saturday.

“Everything we do is funded through donations. We are 100 percent donation based, so these kind of events help us tremendously,” said Mandi Bono, the executive director of the humane society.

More than 100 people took part in the 5K and dog walk. Last year, the event raised around $2,000 and the goal this year was to double that. HYPE or Helping Young Professionals Engage started the event so that locals would have an event they could take their dogs to.

“Most events don’t let you bring their dogs, so that’s how this came up last year,” said race coordinator Trae Long. “HYPE is what puts this on. One of our board members said she wanted something she could bring her dog to, and we were trying to come up with a fundraising event we could do and this grew out of that. Usually the 5Ks and the walks, dogs can’t go.”

In this case, dogs were the star of the show.

Dozens of dogs took part in the dog walk and many were dressed up for the occasion. Bethany Dunn’s dog Sadie was wearing an inspiring shirt that said “Think it, Want It, Get It.”

Rebecca Keegan, her son Jackson and daughter Sarah, were all dressed up as Batman. Their dogs, Suzie Q and Jazz, also got in the act.

Nine-year-old Zoe Sheppard and her two friends Drake Bishop and Emily White were serving as their own type of super heroes too. The three Rosemont Elementary School students set up a table to take donations for pets in Houston, Texas. The Houston area is still recovering from Hurricane Harvey and Sheppard knew she wanted to do something to help animals there.

“It makes me sad because they lost their homes or lost their families, and they don’t have anybody to take care of them,” Sheppard said.

First place in the 5K went to Ted Volkman, who edged Thavin Emerson at the finish line.

“It makes you feel good [to participate],” Volkman said. “It’s a few dollars out of my pocket, but you put a few people together, and it can make a difference.”