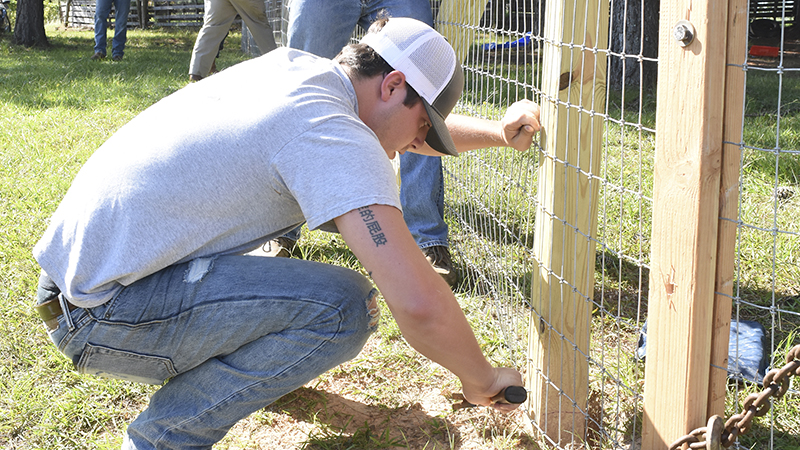 Jacob Socha help put up a fence at a house on Big Springs Road Saturday.

Sheriff James Woodruff and other volunteers helped install a fence at a house on Big Springs Road Saturday morning.

The fence was installed through Paws 4 Chainge, a local nonprofit that is working to eliminate dogs on chains in LaGrange and Troup County.

“I live nearby and so I have to drive by,” said Evie Kettler, who started Paws 4 Chainge. “You don’t even have to look. You just see them. I noticed Dre out here. He was chained up right here. After seeing it so much, I decided I was going to pull in. I told them I was with Paws 4 Chainge and that I was going to build a fence, [and asked] are you OK with that?”

As it turns out, Darrblynn Hardnett and her family were more than happy for the help.

“I was excited because I wanted him off the chain, but I guess the fence was too expensive,” Hardnett said. “We just wanted to get off the chain so he has a chance to be free and not be chained up all day every day.”

The cost of the fence was around $650, Kettler said. Most of the money was raised through the donate button on the organization’s Facebook page. This is the second fence Paws 4 Chainge has installed since the nonprofit started in February.  She played a vital role in encouraging the city of LaGrange to adopt a law against chaining dogs, and she’s been working to try to get the county’s policy changed.

“It’s a chain versus this,” Kettler said while pointing at the fence. “It should be a no brainer. If I can’t get the law changed, and I’m never going to give up, then I’m going to help them this way. I want this to inspire other people to do it in their communities. Don’t just see and be sad about it. See it and do something about it.”