What to expect as Irma passes through LaGrange 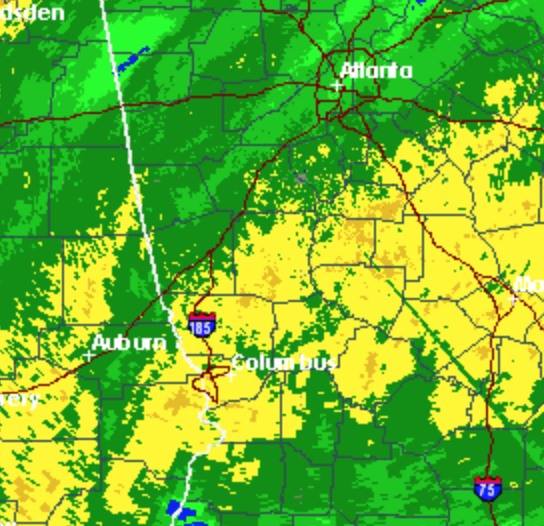 Irma has been downgraded to a tropical storm, but Troup County is still expected to receive heavy wind and rain as a result of the storm.

According to predictions from the National Weather Service in Peachtree City on Monday afternoon, the county is estimated to receive 4 to 5 inches of rain including what had already fallen by 12:30 p.m. Residents in areas that typically flood during times of heavy rain should be on the watch for signs of flooding.

“You are going to see Tropical Storm Irma make its way toward (Troup County),” Meteorologist Kyle Thiem said. “The center of the track is now expected to move toward the Columbus area, so it is going to get pretty close to the Troup County area if not partially graze it a little bit.”

The county is also expected to see high winds, especially going into the evening hours.

“We are going to see the wind gusts pick up, as we already have started to earlier this morning,” Theim said. “It looks like we could get wind gusts all the way up to the high is 60 miles per hour (in Troup County) possibly sometime throughout later this afternoon and evening.”

Residents are encouraged to remain at a safe location through the storm and avoid traveling on roadways as much as possible.

“It is important to remember that while the track is heading toward Columbus, the effects will be felt far beyond where the center of the track is,” Theim said. “We are already experiencing so much rain across the region, and we are already having widespread power outages, especially over the central Georgia area.”

The National Weather Service did not expect any tornadoes in the Troup County area as of Monday afternoon. For continued coverage of the storm, visit the LaGrange Daily News on Facebook or on our website under storm stories.