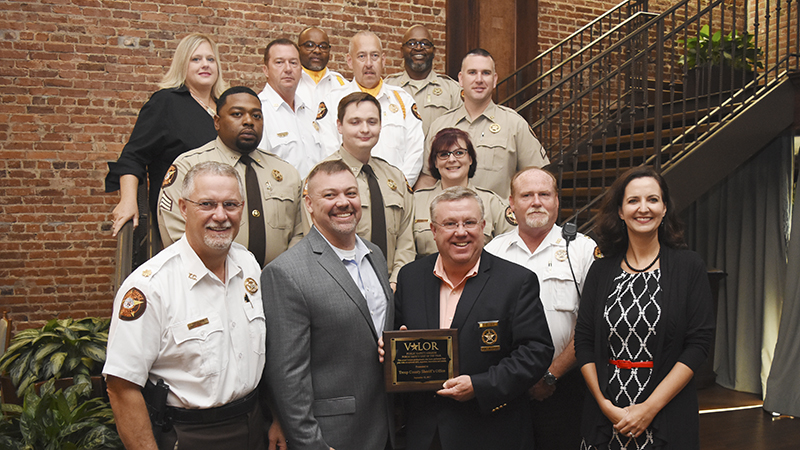 The Troup County Sheriff’s Office won the Valor award for public safety unit of the year Friday at the LaGrange-Troup County Chamber of Commerce. --Daniel Evans

The Valor Awards are presented as recognition of public safety officials or entire units for the jobs they are doing in LaGrange and Troup County.

“These workers, these police officers, sheriff’s deputies, firefighters, medics, EMTs and communication workers deal with the best of humanity and the worst of humanity. They are expected to perform without warning and in a moment’s notice, flawlessly in the face of uncertain conditions and great adversity,” said David Wall, the retired director of the Georgia Public Safety Training Center Fire Academy. “Even athletes are allowed to warm up before they are expected to perform at that level but an officer is expected to bolt from his vehicle and firefighters are expected to jump up from the bed, gear up and within three minutes be inside a working fire. It’s almost an impossible expectation, isn’t it?”

Here are this year’s Valoraward winners:

This award is presented to public safety officials or units in recognition of acts in a situation where an individual’s life is in jeopardy.

Barnett and Gunter responded to a two-car collision, where they found a pick-up truck underneath the rear of a tractor trailer with the driver injured and trapped. They used hydraulic spreaders and cutters to remove the driver’s front door and removed him from the vehicle. They stabilized him on the scene and prepared him for helicopter transport to an Atlanta hospital. Hewett responded to a call of shots fired and located a victim, who had been shot in the back. She was not near her patrol car so she used a piece of the victim’s shirt to apply direct pressure to the wound until medical personnel arrived on the scene. While providing medical aid, she had no idea where the shooter was.

This award is presented to public safety officials for outstanding outreach programs in the community.

This is presented to the public safety communications official who has performed his or her job with exceptionally skill, expertise, innovation and results.

Swanson, a dispatcher, stayed calm through a life-threatening situation for deputies. A Troup County Sheriff Deputy was dispatched to the home of a male that had left home after making threats to a family member. The deputy was shot while on the scene and Swanson was the dispatcher. She stayed calm, requesting additional units to the scene and she stayed in contact with the injured deputy until medical personnel arrived.

PUBLIC SAFETY UNIT OF THE YEAR

This award is presented to the public safety professionals who have performed their jobs with exceptional skill, expertise, innovation and results.

Deputies with the Troup County Sheriff’s Office received a call from a citizen that two people wanted for crimes in Florida and Alabama were on West Point Road and seen turning into a West Point motel. The deputies quickly arrived on the scene, found the suspect’s car and determined that they were in a motel room. After a few hours, deputies had made an arrest and the scene was clear. Deputies directed traffic, maintained a perimeter around the hotel and held press briefings to keep the public informed.

This award is presented to the public safety professional who has performed his or her duty with exceptional skill, expertise, innovation and results.

Mitchell volunteers for programs such as “Real Men Read” and has devoted more than 600 hours to more than 450 events this year.

This award is given to the public safety official or unit who demonstrates extraordinary judgement in performance of duties.

These officers responded to a person who was threatening to jump off a bridge and was removing clothing in below freezing temperatures. The man was dealing with a mental breakdown, but officers were able to talk him off the ledge, convincing him to go to the hospital. The man had recently lost his job and was a mental health patient who was concerned about not being able to provided Christmas gifts for his daughter, so officers helped the man pay for Christmas gifts for his daughter. Hockett was shot in the waist, hand and forehand while on a call for a welfare check. The suspect fled on foot, but Hockett was able to get to his vehicle to call for further assistance. The suspect was arrested and Hockett received treatment at the hospital.

Masuoka was injured while assisting with a traffic accident on I-85 Northbound near mile marker 12. She was talking to the driver of a wrecked pickup truck when a tractor trailer truck the back of the wrecked vehicle, causing her to go airborne over the guard rail. She broke her femur and had other significant injuries. She continues to undergo physical therapy and plans to return to work soon.