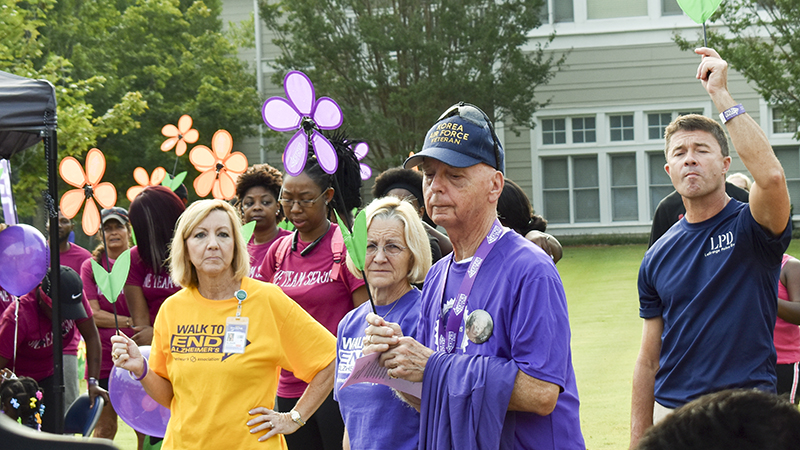 Early Saturday morning, hundreds of locals gathered to raise funds and awareness for Alzheimer’s disease with a walk at Vernon Woods.

Twenty-five teams featuring 176 participants plus volunteers and other walkers participated in the event where they were given the chance to connect with people whose lives have been altered by the disease as a caregiver, advocate or even as someone facing the disease. The event created more than a connection though. It created an opportunity to do something in a situation where many feel powerless.

“Being a nurse, it is difficult to watch the gradual progression of the disease in my mother,” said Linda Barber, the Associate Dean of Nursing at the University of West Georgia. “We aren’t sure how soon after we noticed when she started experiencing symptoms, but we would get calls. She was living alone after my father passed away, but we would get phone calls at various times of the day from friends and neighbors.”

After several concerning phone calls, Barber was forced to move her mother to a nursing home in order to ensure her safety, and now she says that she feels that she has lost her mother, who is still alive.

“I find that I often talk about her in past tense because my mother left us several years ago,” Barber said. “She doesn’t recognize who any of us are, despite having pictures (of us in her room).”

Other people whose loved ones have suffered from Alzheimer’s Disease have made a point of raising funds for Alzheimer’s research, so that one day no one else will have to face the disease.

“Frank Sledge has raised an incredible $7,601, and our top fundraising team is Sons of Sledge which raised an impressive $11,106,” Event Chair Margaret Morton said.

Sledge’s wife passed last year, and his team, the Sons of Sledge, were the top fundraisers for last year’s walk as well.

Businesses played a major role in fundraising efforts too.

“We, like the Alzheimer’s Association, won’t rest until there is an end to Alzheimer’s,” said Natalie Jones from Edward Jones, the walk’s national sponsor. “It is because we care about our clients. For 95 years Edward Jones has been in the business of building healthy relationships, and helping our clients create and manage those as well. The disease is just the opposite. It damages relationships with friends and family.”

While little is known about the cause of Alzheimer’s disease, it is believed that aerobic activity can help prevent the disease, making the walk an appropriate way to fight the disease.

“We are so glad that everyone was able to come out and support us,” Coordinator Ally Barnett said. “We are just thrilled with the turnout this year, and we are really close to reaching our $53,000 goal.”

As of Sunday night, the website listed the total funds raised this year as $34,820.87 out of the event’s $53,000 goal. Some donations from the weekend may not be included in that total until Monday though. Donations for this year’s Walk to End Alzheimer’s will be accepted online until Nov. 3 at Act.alz.org.

Golfing for a cause