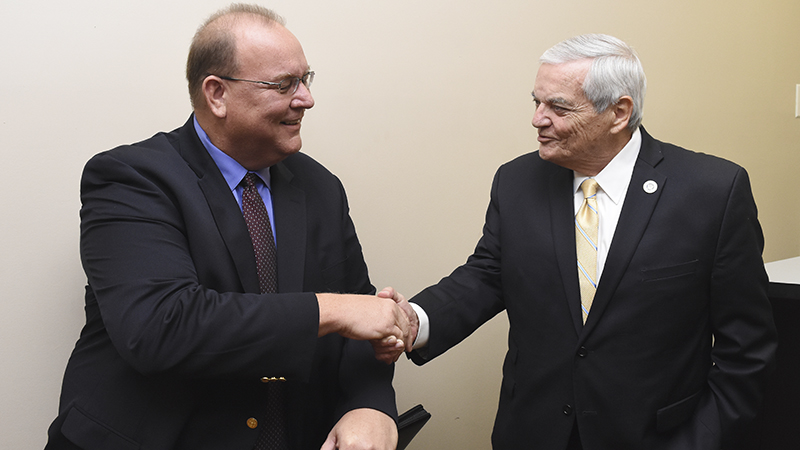 “Hogansville has a lot of opportunity,” Milliron said. “It’s also a great challenge. It has the enterprise funds that I think can help move this city forward and keep the millage rate and taxes down. It’s also a city that is poised for growth. All of that sets you up for an opportunity and challenge to move a city forward.”

Milliron was one of three finalists for the city manager position in Hogansville. David Ashburn and Corey Lamont Alston were the other two finalists.

Hogansville Mayor Bill Stankiewicz said Friday that Milliron was the favorite all along for the position.

“We released three names, but there was never any doubt who the candidate we wanted was,” Stankiewicz said Friday. “We had a No. 1 pick all along.”

“It’s always nice to see to have a greeting that large as a billboard, but it’s also more important that it’s maintained, so you actually show that there’s something behind that welcome,” Milliron said. “I think that’s important.”

For the first six months, Milliron expects to learn more than anything. He wants to sit back and see how the city operates before he makes any major changes.

The councilmembers were very welcoming of the new manager.

“I spoke to you today for about an hour, and you answered a lot of questions that I had,” said Councilmember Reginald Jackson. “I like your ideas. You laid to rest a lot of concerns that people have.”

Others took a minute to thank Stankiewicz for serving in both roles — city manager and mayor — since May.

“I’d like to commend the mayor for doing two jobs and for not losing his [mind],” said Councilmember Fred Higgins.

The council went into executive session before coming back to announce that Milliron was the new city manager. He had served as the city manager of Villa Rice until March, when he was relieved of his duties.

Milliron said that was due to a changing political climate, including a new mayor.

“At the end of the day, all I can tell you is the political climate changed, and they decided they wanted their own city manager to be aligned with their mayor,” Milliron said. “You have to respect that.”

He and his wife Barbara currently live in Villa Rica where they just purchased a house last year. Milliron said they won’t be moving to Hogansville right away. Villa Rica is approximately an hour from Hogansville.

“We will initially be commuting. I did that for the first year in Villa Rica and if you talk to the elected officials in the community, what you’ll find out is that it was not an issue with the amount of time I spent in the community,” he said.

Milliron said he wants to be transparent and very open to the public.

“I will make myself accessible,” he said. “I want them to know they can reach out to me.”