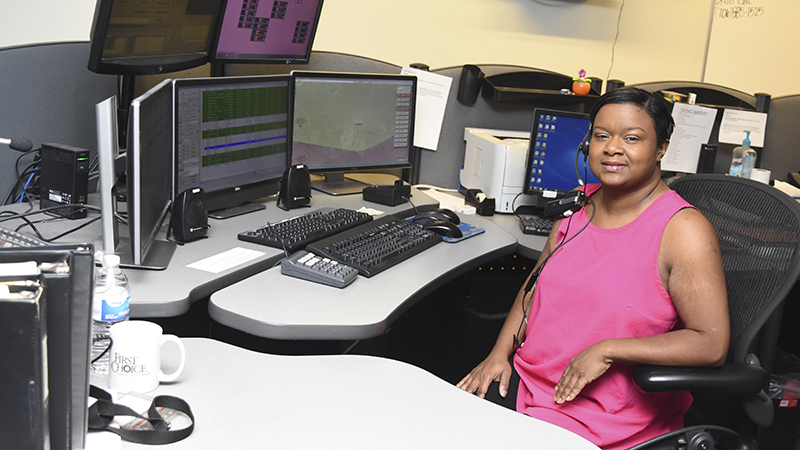 Above, dispatcher Melody Swanson poses for a photo at the Troup County E911 office Tuesday. Swanson was awarded the VALOR award for communications person of the year by the LaGrange-Troup County Chamber of Commerce. --Daniel Evans

Melody Swanson has always had a knack for staying calm in situations that would cause panic in others. She’s not sure why she’s able to keep her nerves under control, but for some reason, in the moment of distress, Swanson is able to keep her cool.

After 16 years of serving as a dispatcher for Troup County E911, Swanson has proven that time and time again. Her official title, senior communication officer, speaks to her growth in a role she started as a 20-year-old at the unemployment office. All she knew when she first applied was that she had a baby on the way and she needed a job quickly. She didn’t even know what the job was when she filled out the application.

“When they called me, I had no idea what they were talking about when they said basic communications,” Swanson said with a laugh. “When I got here [for the interview], they said it’s 911. I was like ‘I never would’ve imagined I’d be filling out for 911.’”

Swanson, a LaGrange native, quickly grew into the role, and on Friday, she received special recognition for the job she’s done. She was awarded the VALOR award for Communications Person of the Year by the LaGrange-Troup County Chamber of Commerce at the chamber’s Early Bird Breakfast.

Swanson received the award for one call in particular, where she served as a dispatcher on a call last year where a suspect fired shots at a deputy and struck him three times.

Swanson kept her cool, called in extra deputies and stayed on the phone until the deputy was safe.

“When somebody’s life is at stake, I stay calm the entire time on the radio and do what I need to do and if I need to go scream, it’ll be after that,” she said. “I was not getting off the radio until I knew he was going to be OK.”

She’s very cautious about the way she approaches calls. She said that particular call may be the only officer shot report she’s had in 16 years, but she tries to handle every call with the same voice.

“My voice will make them react,” Swanson said. “If I’m not calm, if I’m panicking, they are going to be panicking with me. If I’m calm, it can sometimes calm then down to help them focus and think and get there safely.”

Swanson helps her husband, Stacy Boone, DJ in her spare time. The couple has three children — Toireon, Toidorein and Taisiah.

She said any day all the officers go home safely, it’s a great day.

“As long as the police officers, fire fighters — as long as we get to go home to our families — that’s a good day,” she said.

Her biggest fear is that one day it’ll be a family member on the other end of the line, calling about another family member. She hopes that day never comes.

Dispatchers don’t often get the same attention as police officers or firefighters, who are actually out on the streets encountering danger, but they have a very important role, Swanson said.

“We are really the first responders because they call us first. We are the ones who sometimes have to tell these people how to do CRP. We’re the ones who have to tell these people how to do CPR, were the ones who sometimes hear their last breath, but we still keep telling that family member to keep doing CPR, even though we know they took their last breath,” she said.  “We’re the ones that have to find them by tracking their phones when you have that panicked mother and [her children] are lost in the woods.”

It’s not a job for everybody, but after nearly two decades, Swanson has proven she’s an asset to the community.