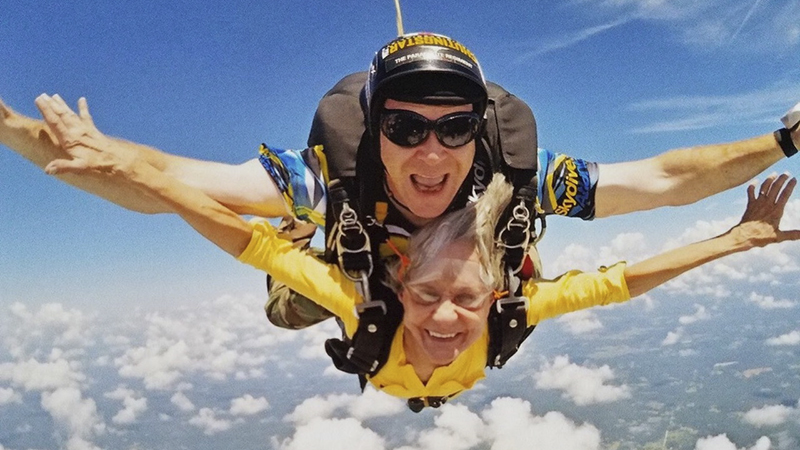 For their birthday, many people go out to a fancy restaurant or celebrate with friends and family.  Others do something extra special, like going on vacation or to a spa.

Alice McMillian Lyles decided to use hers to fulfill a lifelong dream.

“When I first jumped out, I thought ‘wow,’” Lyles said. “I wanted to be turned loose and swim.”

Lyles had tried to go sky diving for her 80th birthday, but couldn’t find anyone willing to go with her.

This year she talked Janice Prince, Lee Daniel and David Looney into going with her. All three are in their 60s and had never gone sky diving before, but all enjoyed the experience. However, it’s clear that nobody enjoyed it more than Lyles. She said she’s had a recurring dream throughout her life about sky diving, but she’d never been able to go.

“I wasn’t even nervous,” Lyles said.

Looney said there were 22 people on the plane. As it made its ascent, he said the instructor asked several times if they were still comfortable jumping.

“When it’s your time and you’re at that door and you look out, it’s real then,” he said with a laugh. “You don’t really have enough time to be nervous, but there’s no backing out then.”

Both Looney and Lyles said they’d go again and jump as singles, instead of with an instructor.

Daniel had a good time, but wasn’t sure he’d jump without a professional guiding him. He said he felt comfortable in their air though.

“Once I got in the plane, I was OK. Once you got to the door and you see the clouds way down there, it makes you wonder why you’re jumping out of an airplane,” Daniel said. “But then, it’s too late. He said 1,2 and you’re gone.”

Lyles is a retired nurse and still volunteers at WellStar West Georgia Medical Center on Fridays.

She’s got 11 months to figure it out, but she could try to top sky diving for her next birthday.

Of course, Daniel and Looney have birthdays coming up first.

“I hadn’t thought about that,” Looney said with a chuckle. “Turn about is fair play.”