Lancaster was in Air Corps in WWII 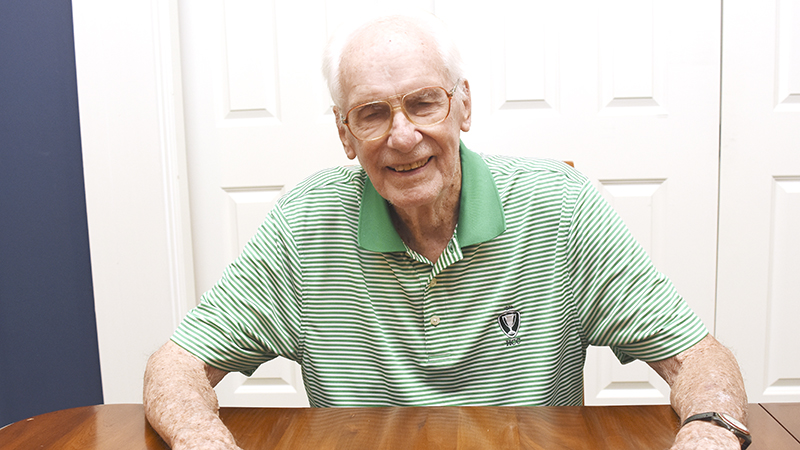 John Lancaster, 94, has been living at Vernon Woods Retirement Home for about three years now. He loves to play golf and is still a member of the country club, although he doesn’t play the game anymore.

His mind is still sharp though, and he has a lot of stories from his time in World World II.

He was a co-pilot for the U.S. Army Air Corps during World War II.

After initially being told he was too tall and too skinny to join, Lancaster managed to get into the air corps anyways. He attended Sewanee, the University of the South, and was recruited in. “I didn’t want to get drafted, and I wanted to fly,” Lancaster said.

Lancaster got his wish.

He went through cadet training at Moody Field in Valdosta and was a co-pilot because he said there were too many pilots at the time. After training, he was transported to England aboard the Queen Mary.

“When we got to the base we were going, we saw all these black airplanes on the runway, and we wondering what the heck they were doing,” he said. “It was a base that had been flying for the Office of Strategic Service, dropping packages to the underground in Denmark.”

It wasn’t long before Lancaster was flying those missions as a “Carpetbagger,” which referred to missions where weapons and other materials were flown into several countries, including France and Italy. He was later transferred to Stockholm, Sweden, where he continued flying in supplies. He said he flew nine total missions, including one where a bad storm had knocked his plane off course. They had flown above the storm, but the plane got knocked off course and lost contact on the radio.

“The lights of Stockholm looked mighty good,” he said.

After being honorably discharged from the military in 1945, Lancaster continued his education at Sewanee. He ended up graduating from Georgia with a degree in forestry, which he used to get a job with Mead Corporation.

Mead transferred him to LaGrange in 1961, and he finished out his 34 years of employment in the city he still calls home.

He was the youngest of ten siblings — seven sisters and two brothers. His next oldest sibling, a 100-year-old sister, is still living.

Lancaster has been married to his wife Dorothy for 64 years. They have a daughter named Lynne, who earned her doctorate degree and works for Ohio University.