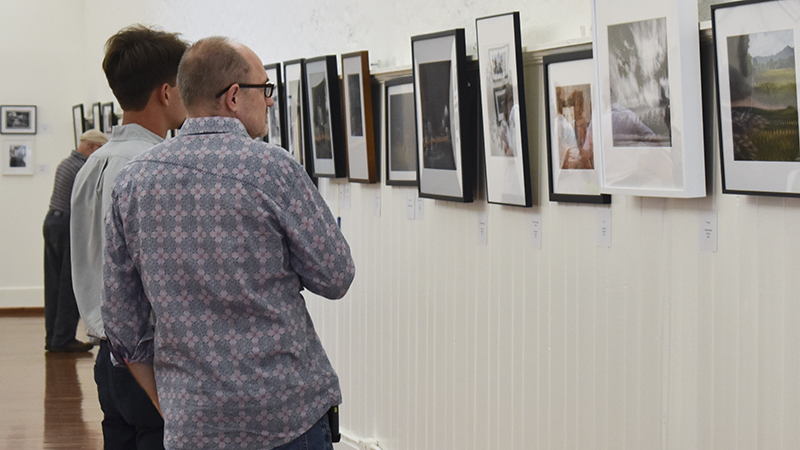 The “Slow Exposures: Celebrating Photography in the Rural South” exhibit opened Friday night at the Cochran Gallery. --Alicia B. Hill

On Friday night, the Cochran Gallery was a picture perfect representation of a small town in the South with the opening of Slow Exposures: Celebrating Photography in the Rural South.

The photography exhibit is part of an annual juried show that attempts to preserve historic buildings, landscapes and memories on film — or memory card. This year’s theme is “Unplugged.”

“The rural South is the theme of this photography show, so it is coming from Zebulon, Georgia,” Gallery Owner Wes Cochran said.

This is the second year that the Slow Exposures has visited the Cochran Gallery, and Wes and Missy Cochran both said they were excited to have it in the gallery again.

“It was beautiful last year too,” Cochran said. “It seems like it gets better and better every year.”

According to Cochran, the 70 photos in the full show are selected from over 600 submitted photos from photographers from all over the country by a jury. This year, a LaGrange photographer’s work is featured alongside the impressive selection of shots in the show.

“This is local, from out in the Liberty Hill area, and I kind of have a thing for Marilyn Monroe, and I had heard that this guy’s dad had a cabin that was chock full of Marilyn Monroe stuff,” Photographer Ray Sullivan said. “I asked him if I could visit the cabin and maybe take some pictures, so I shot a lot of pictures. This just happens to be one of them.”

Sullivan submitted several pieces to be considered for the show and was excited that his photo featuring one of film’s most iconic blondes was chosen for by the jury.

“You can see, it’s got a lot of character to it,” Sullivan said. “I was thrilled that they chose the art for this show.”

To learn more about the show visit Slowexposures.org or view the show at the Cochran Gallery at 4 E Lafayette Square, Wednesday through Saturday, 1 p.m. to 5 p.m.