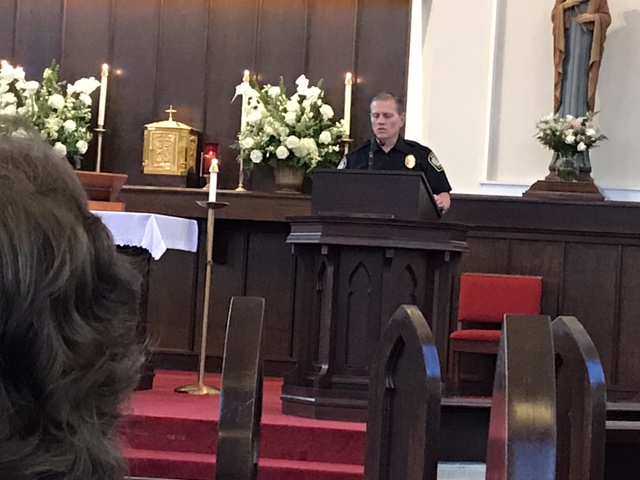 “The purpose of the “Blue Mass” is to give thanks to God for our first responders and to exhort God to watch over them, heal them and protect them,” Gadziala said.  “It is my hope that our first ‘Blue Mass’ will become an annual event for our community and city.  These brave men and women in uniform, whether police officers, firefighters, paramedics or public safety officials pledge to make the ultimate sacrifice if necessary — laying down their lives for the citizens of LaGrange and Troup County.”

St. Peter’s Catholic Church welcomed home town heroes to the “Blue Mass” in their honor. LaGrange’s Chief of Police, Louis Dekmar, gave a Reading from the pulpit. Mayor Jim Thornton sat amidst the blue uniforms with pride in all these brave men and women.  Strains of “God Bless America” and “Let there be Peace on Earth” filled the air, led by Music Director and Cantor, Rachel Krimm.

As a pianist played “America the Beautiful”, Gadziala presented each of the first responders, as they walked in procession to the front of the Church, with a special medal to carry in their pocket. “The medal I gave them was a medal of St. Michael the Archangel who is considered to be the patron for those who are in battle, for in my opinion those are our ‘first responders’,” Gadziala said. “In my homily, I emphasized that our first responders are like angels, because they are agents of protection and healing, guarding us with watchful eyes.  The purpose of the ‘Blue Mass’ is to give thanks to God for our first responders and to exhort God to watch over them, heal them and protect them.”

Gadziala spoke of the images of 9/11 and the terrorist attack on the Twin Towers in New York City saying that those images will be embedded in the minds and hearts of Americans forever. Those who gave their lives to save others that tragic day — will never be forgotten — as first responders marched bravely into battle. He continued that the recent Hurricanes, Irma and Harvey, also showcased the heroism and sacrifice of our first responders and civic leaders.