In addition to mammograms, self-awareness is key to detecting breast cancer 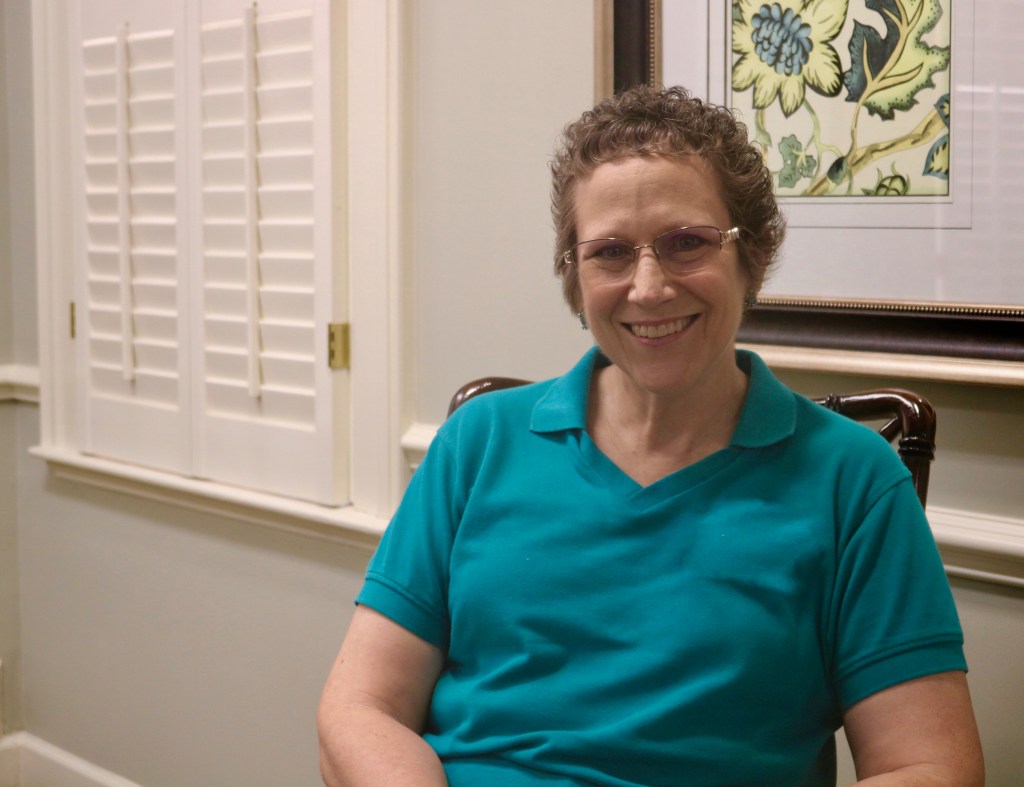 After her mammogram results were normal during an annual preventive screening in July 2016, Jacqueline Davis seemed like the last person who would learn less than four weeks later that she had a 50/50 chance of surviving breast cancer.

“I’ve had mammograms since I was in my 40s, and every year, they’ve been normal,” said Davis, 55, a development specialist for the West Georgia Health Foundation at WellStar West Georgia Medical Center since 2007. “I had been concerned because I had a little swelling under my arm, but the mammogram seemed to indicate that everything was OK.”

She attributed the swelling to an injury received the week before when, as she was navigating a zero-turn lawnmower, she dipped into a small hole in her yard and felt a pain shooting through her pectoral muscles.

“We have an Employee Health Clinic at the hospital, so I went there as soon as I could and started on some antibiotics to clear what we thought was an infection,” Davis said. “But after a few days, I wasn’t getting better.”

She called Dr. Margaret Schaufler’s office and was seen by the gynecologist within the hour. Concerned, Dr. Schaufler sent her to Dr. Vincent Scoglietti, and within a few days, she was back at the Women’s Health Center where she’d received her mammogram. This time, Dr. Marissa Fiore performed a biopsy.

Davis returned to Scoglietti for her results, and as someone who eats healthy, exercises, and receives regular mammograms, she was floored by the news.

“The mammogram showed nothing in early July, but at the end of that month, they found a very aggressive post-menopausal breast cancer that had grown to the size of a hockey puck in just a few weeks,” she said.

After Scoglietti gave her the life-altering news, Davis found herself sitting down with Dr. Wassim Mchayleh, oncologist and medical director of Oncology Services at WellStar WGMC.

“Dr. Mchayleh was the one who told me that my cancer was very aggressive, and that I had a 50/50 chance,” she said. “But he said that while it was aggressive, he assured me that he was even more aggressive.”

Davis learned she was BRCA1 positive, which means she carries a human tumor suppressor gene with an inherited mutation that increases the risk of breast and ovarian cancer.

“My mother died at 38 of ovarian cancer, and my great-grandmother died of breast cancer in her late 40s,” she said. “After I learned I had cancer, my aunt told me that three of my first cousins were also BRCA1 positive and had been treated for breast cancer, but I hadn’t known it because they all live in Indiana.”

A genetic counselor in Indiana had helped some of Davis’ relatives with mapping the BRCA1 gene mutation in their family. It’s a service also offered at WellStar WGMC through WellStar’s genetic counseling and testing program.

By the time she started chemotherapy treatments, her cancer — which had spread from the right breast to the lymph nodes — had reached Stage 3. Davis began chemotherapy treatments once a week from Aug. through Dec. in Ambulatory Infusion at WGMC. She then underwent radiation therapy with WGMC’s radiation oncologist Dr. Robert Taylor five days a week for six weeks. Even though they live 55 miles away, her husband, Gary, accompanied her each time.

“My white and red blood cell counts were way down at times, and because of that, I couldn’t be around people, go to restaurants, or do anything with large crowds of people,” she said. “So besides Gary, who was wonderful, all of the doctors and nurses really became my family.”

Davis had a double mastectomy in January of this year. Follow-up tests and exams from her oncology team have shown the cancer was completely eliminated in the breasts and lymph nodes. She will have reconstructive surgery by Dr. Mel Stewart in October.

In her role as a development specialist and writer at the West Georgia Health Foundation, Davis’s primary focus for the past several years has been to raise funds for the renovation and expansion of WGMC’s Enoch Callaway Cancer Center. Because of this, she knows better than most the personal stories of how the Cancer Care team at WGMC provides the LaGrange community and beyond with unparalleled cancer treatment.

“I’ve researched and written about what they do,” she said. “I never expected I would be on the other side as a patient.

“I’ve always been a Yoda fan, and I love the quote, ‘Do or do not. There is no try.’ I learned through my cancer experience that Dr. Mchayleh’s and Dr. Taylor’s teams don’t just try to cure cancer. If it can be done, they do it.”

Davis not only encourages all women over 40 to have regular mammograms, but also to perform self-exams, have a doctor feel for any abnormalities during annual exams, and act quickly when they notice anything different with their bodies.

“With the rare type of cancer I had, it wouldn’t have been picked up on a mammogram,” she said. “Mammograms are absolutely the best way to catch most abnormalities early, but women need to also be aware that they’re not off the hook just by getting regular mammograms.

“If I hadn’t felt something abnormal and gotten to a doctor quickly, I wouldn’t be here today.”

The annual Paint The Town Pink and the HOPE for a Day Walk will be held on Saturday, Sept. 30, to educate the community on breast cancer. The HOPE walk raises money to provide resources and financial assistance to patients locally for their personal expenses during their treatment period and to award grants to local health agencies to provide screenings and mammogram vouchers to qualifying women. Paint The Town Pink also offers free clinical breast exams and free mammogram vouchers to women who qualify. The 10-mile walk is from 8 a.m. to 12:30 p.m. through downtown LaGrange, and Paint The Town Pink will be held on Lafayette Square from 10 a.m. to 2 p.m.