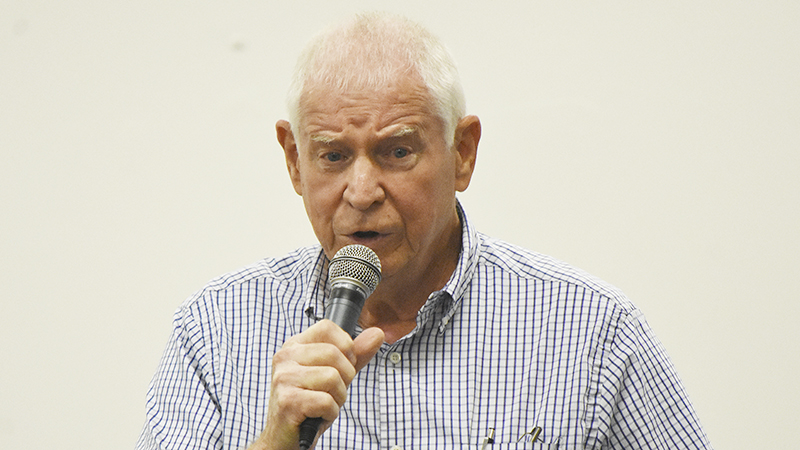 This was the second community meeting held on the gyms this month, with the first coming in West Point. Many were confused as to why the school board tabled the vote in August, deciding to wait another 60 days — until its October meeting — to decide on the two gymnasiums.

Board members Ted Alford, the Rev. Allen Simpson, Joe Franklin, Kirk Hancock and Cathy Hunt spent Monday trying to clear up that confusion and to answer as many questions as possible, while also getting the opinion of the people they serve.

The gymnasiums were originally estimated to cost around $9 million apiece, not factoring in land acquisition. Now the projected cost is more than $12 million for each facility.

At its August meeting, the board decided to slow the process down — tabling the vote until October so they could spend extra time gathering details on how to keep the cost down. The largest debate has been centered around multiuse areas — regularly called indoor practice fields during the meetings — that could be cut from the construction and would save millions of dollars.

Funding for the gyms is coming from E-SPLOST V, which was voted on and passed by many of the people who were at Monday’s meeting.

The biggest hold-up continues to center around indoor practice facilities, or multiuse areas, that will be used by multiple teams at the school. Callaway High School, the third Troup County High School, already has a gymnasium that includes an indoor field.

“As we campaigned for the SPLOST, we showed you pictures. We told you what we were going to do and that’s what you voted on. You voted on that project,” said Alford, the board chairman. “The $9 million was not a set figure. It was a prediction of what it might be, and of course, it came in larger. This is what you voted for and if you voted for it, I think we need to honor the votes. That’s the bottom line from the three of us that voted for it.”

Alford said they still have questions about the numbers and it bothers him that the cost is so high, but that the voters should get what they voted for.

Other board members said they want to fulfill that promise, but it isn’t that easy.

“We’re still in somewhat of a dilemma about how to proceed,” Hunt said. “We were told in West Point we need to do the right thing and bring in these projects, but there’s a two-pronged right thing here, and the other part of that is we have to be fiscally responsible to the taxpayers,” Hunt said.

The cost of the Troup facility is estimated to be $12.6 million and the LaGrange gym is estimated to cost $12.3 million. The gyms will be very similar, but there will be slight differences, due to the land available.

Right now, the school system is still trying to acquire the land needed for the LaGrange High facility.

“The unknowns there could be a lot of money,” Franklin said. “For instance, we do not own the property to build that building on. We are in the process of working on that, to get some numbers on it.”

Board member Kirk Hancock said the board is dedicated to both gymnasiums being built. The question is how to keep the cost down.

Alford said he will recommend that the board passes it as is. Franklin said expenses have been cut just about everywhere, so the only thing left on the chopping block is the multiuse facility.

However, Franklin said a vote will happen in October.

“We won’t push this out any further,” Franklin said. “We will decide something at the October meeting.”