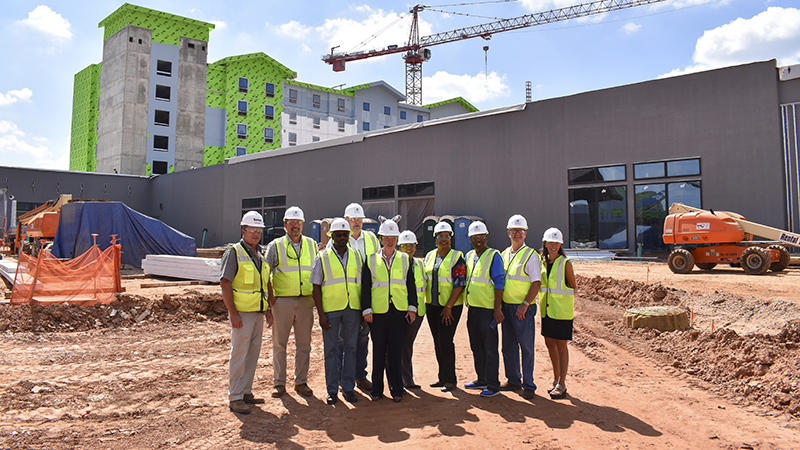 The LaGrange City Council poses for a photo at Great Wolf Lodge Tuesday. --Alicia B. Hill

Some locals may never stay at Great Wolf Lodge and Resort, but that doesn’t mean there isn’t plenty for people from Troup County to be excited about.

The lodge, which requires an overnight stay to use the water park, showed the LaGrange City Council everything else that will be available on Tuesday, including a Dunkin’ Donuts and Ben & Jerry’s.

“Dunkin’ Donuts will have a completely walk up to counter where you can get your donuts just like any other store, and then further on down you will have Ben & Jerry’s, which is a whole other little ice cream outlet place,” said Josh Storey, the Stantec project manager over the conference center’s construction.

The resort will also feature several restaurants that will be open to the general public, including a brick oven pizzeria, a candy shop, a buffet, a bar, a Tex Mex restaurant and an upscale steakhouse.

“All of this is open to the public, so every bit of that stuff in the restaurant and everything in the front lobby and to the east or to the left is wide open to the public the way we understand it,” General Superintendent Bobby Langdale said. “I’m sure that you have to pay to play in the arcade or the (mini) golf course or restaurants or whatever — that goes without saying — but all of that is open to people traveling along the interstate and local persons from Troup County and the city of LaGrange.”

The resort will also include a full-service arcade, a rock wall and a miniature bowling alley that locals can use without staying at the hotel, as well as other dry activities that locals will be able to take advantage of.

“There is a ropes course there, and it will have the themed trees all around it and the miniature golf course underneath it,” Storey said. “There is a game called MagiQuest where you get wands that have little remotes in them that can go to different areas throughout the entire resort and activate little screens, and eventually, at the end of the thing you fight a dragon with your wand.”

These facilities will be in addition to the conference center. The city is already receiving requests to book conferences for when the resort opens in the spring of 2018.

Dekmar to be honored at Kennedy Center